To celebrate the recent release of the new paperback version of Tangleweed and Brine I'm thrilled to have a brilliant guest post to share with you today from Deirdre Sullivan. She's going to use her Tarot cards to recommend some fantastic YA reads to you all but first I want to rave about Tangleweed and Brine, Deirdre's fabulous collection of feminist fairytale retellings with beautiful illustrations by Karen Vaughan. Even if you read this when it was first released in hardback last year the new paperback contains a whole new extra story so theres even more to love about it. 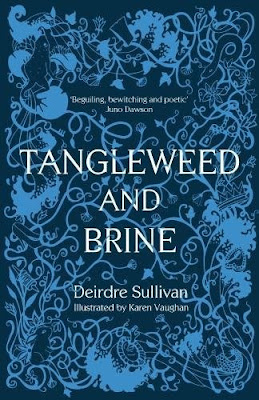 Paperback edition of bestselling book from 2017, with a bonus story in this edition

A collection of thirteen dark, feminist retellings of traditional fairytales from one of Ireland's leading writers for young people.

In the tradition of Angela Carter, stories such as Cinderella and Rumpelstiltskin are given a witchy makeover, not for the faint-hearted.

Intricately illustrated with black and white line drawings, in the style of Aubrey Beardsley, by a new Irish illustrator Karen Vaughan.

You can read my review of Tangleweed and Brine here

Now please give a HUGE welcome to Deirdre Sullivan!


Tarot YA Spread or a spread recommending different kinds of YA books!
By Deirdre Sullivan 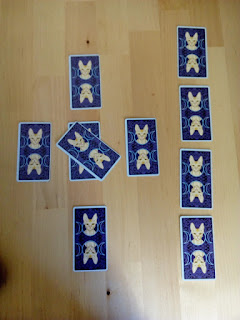 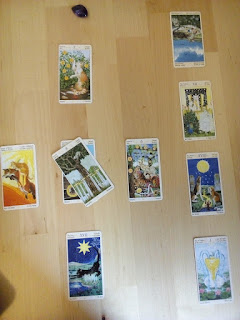 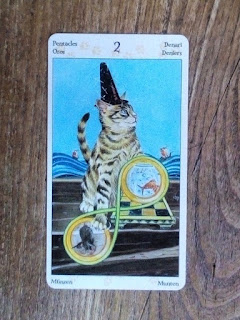 Card One: The Present
Two of Pentacles: Balancing things and trying to keep things running smoothly even when it’s difficult is something that Evie, the protagonist of Am I Normal Yet? by Holly Bourne has to deal with. This book is also really clever about juggling with YA tropes and subverting the readers’ expectations.
Advice: READ IT.


Card Two: The Challenge
Eight of Swords: This is an isolating card. The poor cat is blind and trapped up a tree. It can’t rely on it’s sight to keep itself safe. But the swords are stuck into the ground. Though it’s a scary situation, the poor lil’ guy will probably emerge from it unscathed. The Space Between, a YA verse novel by Meg Grehan, deals with Agoraphobia, love of girls and books, and the healing power of a real good dog. Sometimes, the world is big and full of swords. But that doesn’t mean the grass isn’t green and the trees aren’t shady.
Advice: READ IT.

Card Three: The Past
Knight of Wands: This is an energetic and impulsive card, this lil’ dude is riding his fox into the great unknown, and it might go well, but there might be a bit too much fire in the mix. The Curious Tale of The Lady Caraboo by Catherine Johnson is a tale of escape, subterfuge, nerve and bravery that doesn’t shy away from the darker sides of human nature. I adored it, and writing this makes me want to reread it again.
Advice: READ IT


Card Four: The Future
Six of Pentacles: This is a real chill card. Balance and charity and kindness and sharing and self-care. It made me think of a kindness my pal, Dave Rudden did in his new book for another friend (who may come up later if the cards are kind), Sarah Griff. He wrote a Doctor Who story starring her mother, Patricia as a little girl who gets to meet the new doctor, and learns that it’s okay to love science and be curious and kind. The collection is called Twelve Angels weeping and it’s dark and glorious and Christmassy and nerdy and I like it a lot. I read it aloud to my husband over a plate of fancy brunch.
Advice: READ IT.


Card Five: Above
Seven of Pentacles: What are the odds? Mystical and earthy, I love me a number seven. Reaping what you sow for good or ill, is something that this card often gives me a little nudge about. Spellbook of The Lost and Found by Moira Fowley Doyle is a glorious witchy book, written like a beautiful incantation. Lost pieces of lives and selves, desperate acts and spells, acts of love and desperation all tangled up together like a braid of hair. If you like books you can take a bath in, you’ll adore it.
Advice: READ IT. 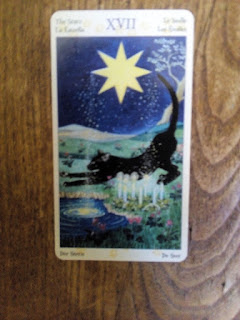 Card Six: Below
The Star: Light and Dark, roses and thorns. The Star is beautiful, but it can burn you too. Marvellous things come at a price. You do the work. You pay the toll. Sarah Maria Griffin’s upcoming book, Other Words for Smoke is a demonic and lovely thing about the underside of what you long for. It, like the Star, comes with a few footnotes.
Advice: Pre-Order it.

Card Seven: Advice
Ace of cups: New beginnings, water, creativity. Opening yourself, becoming vulnerable. Juno Dawson’s Clean is a story of emerging from darkness, and finding new beginnings. It’s witty, dark, sharp as a knife and kind as a heart. I adored it.
Advice: Read it

Card Eight: External Influences
The Moon: Doors opening and closing, some things are clear, others misty. The moon appears for me a lot when I’m working on something new. Not being able to touch exactly what it is yet, but having to keep trying, keep accessing the thing inside me that makes stories happen. The moon is like a poem. It may not mean the same thing twice, but it touches something deep inside you. Sarah Crossan, Laureate na nÓg and all-round champion of books and poetry has a book called Moonrise that came out last year, about loss and love and structures that may not work for us but still confine us. It has a moon on the cover. I did not have to reach very far to think of this one.
Advice: Read it. 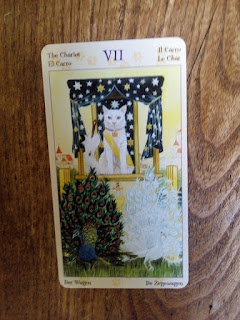 Card Nine: Hopes and Fears
The Chariot: Another number seven this is a card of motion and progress, change and the drive for change. Claire Hennessy’s Like Other Girls was written about the impact of the eighth amendment, before we voted to repeal it last year. However, change takes time, and people are still travelling every day to access healthcare. Meanwhile, activists in Northern Ireland are still fighting for their right to choose what happens inside their bodies. Fierce as a lion, sharp as a tack, Like Other Girls enraged and energised me. Change doesn’t just happen. People make it happen. I’m so grateful to everyone who raised their voice to demand a kinder Ireland.
Advice: Read it. 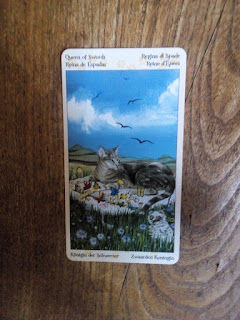 Card Ten: Outcome
Queen of Swords: Sorrow and clarity. Growing in maturity and objectivity, but the kind of growth that hurts. The Queen of Swords is a card I associate with one writer, Anna Carey, because it’s her tarot card. (Irish YA is quite a witchy place to be). Her books, The Making of Mollie and Mollie on The March deal with activism and suffrage in Ireland, as does Star by Star by the marvellous Sheena Wilkinson. If you like crystal clear, impeccably researched historical fiction that deals gently and artfully with heavy themes, you should definitely check them out.
Advice: Read them now. 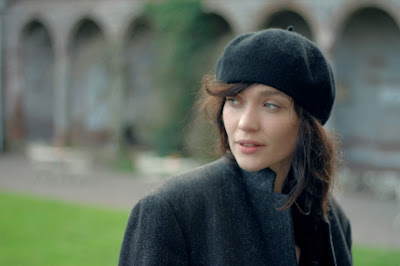 Deirdre Sullivan is an award-winning writer from Galway. As well as the Primrose Leary trilogy (Prim Improper, Improper Order and Primperfect) she has written three books in the Nightmare Club series, a standalone Novel, Needlework, and a collection of fairy-tale retellings, Tangleweed and Brine.
Deirdre also writes short fiction and poetry, which has been published in places like Banshee, The Penny Dreadful, Mslexia, and the Dublin Review. She’s currently developing a play called Wake with No Ropes theatre company.

When Deirdre is not writing she is a reader and a guinea pig enthusiast. She still likes cake, but she’s been hearing some good things about biscuits recently.