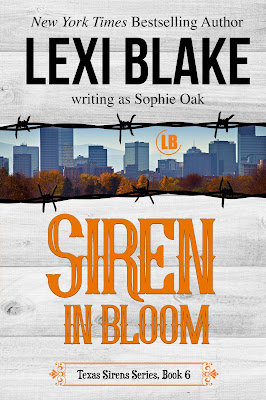 For psychologist Leo Meyer, peace and comfort come through strict discipline and order. It’s one of the reasons he was chosen by Julian Lodge to be the Dom in residence at his club. His time there has been a near-perfect existence filled with a daily routine free from the chaos of emotional attachment. With the exception of his brief relationship with Shelley McNamara, that is. She may have been the only woman he ever truly loved, but he was confident he had put her out of his mind until she walked into his club on the arm of another man.

Shelley McNamara is tired of waiting for her new life to begin. After finally finding freedom from an abusive marriage, she is eager to discover who she really is. After her encounter with Leo Meyer, she knows that the first thing she wants to explore is the lifestyle he exposed her to during their brief time together. She’s been promised her new Dom will be an excellent fit, but she can’t imagine anyone could fill the hole left by Leo. Until she sees Master Wolf.

After a devastating injury forced his retirement from the Navy SEALs, Wolf has been restless and lost. Hoping to reconnect with his estranged family in Dallas, Wolf accepted a new job working for Julian Lodge. His first assignment is training a beautiful woman named Shelley. Her fiery nature unlocks feelings he didn’t know he was capable of after a life spent in combat. The closer they become, the more certain he is that she is his ideal mate. The only catch is that her relationship with Leo may not be as resolved as they both believed.

Just when Shelley believes the looming shadow of her deceased husband has finally cleared away, a dangerous killer arrives at her door seeking retribution. Leo and Wolf will have to put their grievances aside, leverage all their training, and work together to keep her safe and claim her heart.

Review:
Shelley spent her whole life looking after the people she loves, she was blackmailed into marriage to protect her mother, she did everything she could to help her brother through his drug and alcohol dependence and she walked away from the man she loved to keep him safe from her dangerous and abusive husband. Now that her husband is dead she is finally ready to move on with her life and when Leo makes it clear he's not willing to give her a second chance she realises that she's going to have to let him go and find a future with someone else.

Wolf is Leo's brother but when he agrees to train Shelley has his new sub he had no idea that she had previously been involved with his brother. By the time he finds out about Shelley and Leo's history it's too late and he's already started falling in love with her himself. But Wolf was raised in Bliss so he doesn't see anything wrong with sharing Shelley with Leo, in fact he has spent years wishing for a closer relationship with his brother and feeling hurt that Leo keeps him at arm's length, so he decides to do whatever it takes to bring the three of them together.

Leo has loved Shelley for years but was heartbroken when she rejected him, instead choosing to stay with a husband that emotionally abused her. The attraction he feels towards her is still there but he's scared of letting her get close in case she hurts him again so instead he remains determined to keep his distance. That suddenly seems a lot harder when he sees Shelley start to fall in love with someone else though and when Wolf asks him to help fulfil her wildest fantasies he finds it very difficult to say no.

Leo and Wolf have been regular recurring characters throughout the Texas Sirens and Nights in Bliss series so I can't tell you how excited I was to finally get my hands on their story. I already really liked Shelley (we got to see quite a bit of her in her brother Trev's book Siren in Waiting) and if anyone deserves to find happiness after everything they've been through it has to be her. I really enjoyed seeing how these three finally ended up coming together. It's funny because Leo is a psychologist who is excellent at diagnosing others and helping them find love but when it comes to his own relationship he is a stubborn disaster. I enjoyed seeing Julian pulling strings to try and bring them all together and really liked how open Wolf was about his desires and wish to create a family for the three of them.

As with all the books in this series there was plenty of heat and this triad had fabulous chemistry as well as a much deeper connection. There was also a sense of danger as both Shelley and Leo's past starts to catch up with them and they find themselves under attack. We get to see a lot of familiar faces as most of the story is set at The Club run by Julian Lodge and I just genuinely enjoy spending time in this world with all of these characters.