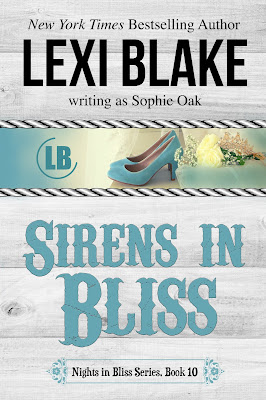 It’s the event of the year. The wedding of Leo and Wolf to their beautiful sub, Shelley McNamara, has all of Bliss up in arms—and makes everyone think about love and marriage and family.

Wolf and Leo have to deal with the sudden reappearance of their father. Rafe Kincaid is handed an opportunity that might take him and his family away from Bliss. Aidan, Lexi, and Lucas O’Malley find themselves at a crossroads in their marriage. And Stefan Talbot must face his biggest fear—possibly losing his wife in childbirth.

So come to the Feed Store Church, pick a seat, and enjoy the chaos as all your favorite characters from Texas Sirens and Nights in Bliss, Colorado, come together for one eventful weekend.

And some of them may never be the same again.

Note: This is a reunion book, which shares an overall story arc and many crossover characters with the Texas Sirens and Nights in Bliss series. This is not a stand-alone.

Review:
Most of the books in the Nights in Bliss and Texas Sirens series work completely standalone so while you'll appreciate them more if you're familiar with the side characters you don't need to have read previous books to enjoy then. Sirens in Bliss is different because this really is an homage to all the books that have come before and it ties the two series together as Wolf, Leo and Shelley return to their hometown Bliss to get married and bring all their friends from Texas home with them. There's always been some crossover between the two series but here we get to see nearly all of our favourite characters from both together for the first time and it leads to all sorts of hilarious conversations.

While this book is ostensibly about Wolf, Leo, Shelley and their upcoming wedding it's also a chance to check in with previous couples & thruples at important points in their lives. Stefan is panicking at the impending birth of his first child and absolutely terrified that something terrible will happen to Jen. Rafe is struggling to settle in Bliss and has been offered the opportunity of a new job but it would mean convincing Cam and Laura to move to Miami with him. Then you have Aidan, Lexi and Lucas who are pulling away from each other at a time they need each other the most. Obviously we see lots of other characters in the background too but these are the main focuses of the story.

What I loved most is that we're getting to see Wolf, Leo and Shelley take the next big step in their relationship but at the same time we're reminded that a wedding isn't an automatic happily ever after. All relationships will be tested at some point, people all bring their own baggage to the table and everyone has to work hard at keeping their love alive. The important thing isn't to have a perfect life, it's being willing to put the work in to make the relationship a success.

Sirens in Bliss has all the humour of the previous books as well as all the heart. It's all about the importance of families, yes the one you're born to but sometimes even more importantly the one you choose for yourself. Friendship plays a huge role in this series and I love how each of the characters supports everyone else.