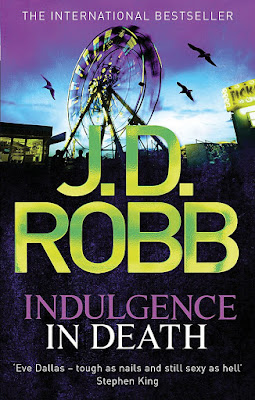 'It's playing more and more like it was for the thrill. Just for the rush. And if that's the way it is, he's already looking for the next thrill.'

First it was a limo driver shot through the neck with a crossbow. Then it was a high-priced escort found stabbed through the heart with a bayonet. Random hits, thrill kills, and murderers with a taste for the finer things in life - and death - are making NYPSD Lieutenant Eve Dallas angry. And an angry Eve can be just as an efficient and dangerous predator as the killer.

As time runs out on another innocent victim's life, Eve's investigation will take her into the rarefied circle that her lover Roarke travels in - and into the perverted heart of madness . . .

Review:
The beginning of this book sees Eve and Roarke take some well deserved vacation time to travel to Ireland to visit Roarke's family. I'm really glad we're getting to know his family a little better now and its always fun to see how out of her element Eve is when she's surrounded by people who care about her. I really loved the surprise she'd arranged for Roarke too, sometimes she can be more thoughtful than you'd expect.

Of course things quickly get back to normal for them when they return to New York and Eve gets caught up in the hunt for a serial killer. This is a killer unlike any she's faced before, one who seems to take great joy in choosing their victims and hunting them for sport. Eve has a pretty good idea who her killer is but when it comes to taking on someone rich and powerful you need to have your evidence lined up just right so they can't wriggle out of the charges. Of course there's nobody better than Eve to make sure a killer is brought to justice, she just needs to do it fast before any more innocent victims lose their lives.

I'm still totally hooked on this series, I can't quite believe that 31 books in and I'm still loving it THIS much but to all those people who have tried to get me to read it for YEARS you were right, it IS the best! The characters, the mysteries, the humour, the romance, the death and destruction, all of it comes together in an irresistible combination that is totally addictive and the more books I read the more I love this world. J.D. Robb is a fantastic writer & I'm glad she's such a prolific one too!