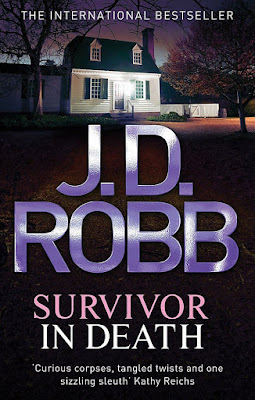 Murder was always an insult. But the murder, bloody and brutal, of an entire family in their own home, was a different form of evil.

Nixie Swisher crept down the stairs for a drink - and saved her own life. When Lieutenant Eve Dallas is called to the house minutes later, she finds the whole family murdered in their beds. But the killers made a mistake: they left a survivor.

Nixie saw everything. And unfortunately for her, these elite killers soon realise they need to finish the job. So Eve and her billionaire husband Roarke give everything they can to keep Nixie safe in their own home.

And then a terrifying climax reveals there may be more to Nixie than meets the eye . . .

Review:
When a family is brutally murdered in their beds there is only one survivor, a nine-year-old girl Nixie, who had sneaked downstairs in the middle of the night to get a drink. She is the only witness to the tragedy and she's terrified the masked intruders are going to come after her next. Nixie quickly latches on to Eve, the only person she believes can keep her safe, so now Eve not only has a murder to solve but also a young, vulnerable child to care for until her next of kin can be found.

The murder mysteries in this series are always cleverly written and intriguing but more than anything it's the characters that keep me coming back for more, 20 books in and I love them more than ever. Eve and Roarke are both forced to look back at their pasts in this one, caring for such an innocent child takes them both back and makes them wonder again about the parents who were able to abuse them so cruelly. Neither of them are particularly comfortable around Nixie but they both do their best to try and help  her deal with the traumatic experience she's been through, Roarke goes into overprotective mode running background checks on potential guardians for her while Eve tries to focus more on catching the killers so Nixie knows they can't hurt her.

It was really interesting to see how off balance they both were around a young girl and it just showed them how totally unprepared they both are for children of their own right now. I'm sure that will change in the future considering how far they've already come but I'm glad neither of them is in a rush to take that step. Now we've seen them with a tween I can't wait to see their reactions when Mavis has her baby!

All of the usual team are around and on top form adding their individual brands of humour to the story. I'm still really enjoying Peabody's recent promotion and seeing her and Eve find a new way of working together now they're partners rather than Lieutenant and aide. It's also great to see their growing friendship and Eve starting to open up to Peabody. Overall this was another great instalment that left me ready to dive straight into the next book.