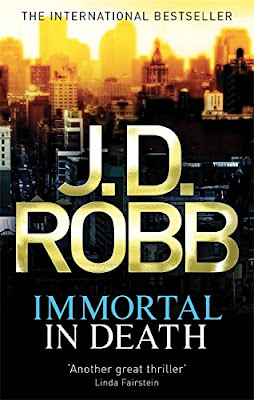 She'd come to New York to be a cop because she believed in order, needed it to survive. She had taken control, had made herself into the person some anonymous social worker had named Eve Dallas.

Now she is changing again, from Eve Dallas, homicide lieutenant, to Roarke's bride. But Eve's wedding plans are put on hold when her private and professional lives collide.

The murder victim is one of the most sought-after models in the world, a woman who would stop at nothing to get what she wanted, even someone else's man. And Eve's chief suspect is the other member of this fatal love triangle, her best friend Mavis.

Putting her job on the line to head the investigation, Eve discovers a world that thrives on an all-consuming passion for youth and fame, leading her to the dark streets of New York City where drugs can fulfil any desire - for a price.

Review:
Preparing for a wedding is always a stressful time for any couple but when you're as gun shy about relationships as Eve is it only makes things worse. While Eve is busy stressing about the future and whether her and Roarke can really go the distance Roarke is worrying about whether Eve will actually turn up on the big day. Finding out her best friend Mavis is the main suspect in a very high profile murder investigation is just the icing on the cake for Eve. At least now she's got a genuine reason to avoid all the wedding organisation but if she fails to find the real murderer then her best friend's life is at stake.

I think Immortal in Death was my favourite book in the series so far, it contains all the action and mystery of the previous book but with some really fantastic character growth on Eve's part too. We're to build a bigger picture of what happened to her as a child now that she's starting to regain her memories and it explains a lot about her personality. She's also thawing out a little as she lets Roarke in which was nice to see. She still finds it very hard to express her feelings and there are times when she unintentionally hurts him by not thinking before she speaks but she's come a long way and is finally able to admit how she feels. Roarke has been incredibly understanding about her behaviour so far but his patience is starting to pay off and I love the two of them together.

I enjoyed the suspense side of the story too but I have to admit I'd had a bad feeling about one particular character from very early on so I had been able to guess who was behind everything. I hadn't figured out exactly how it all tied together though and I still enjoyed seeing Eve work her magic as she tried to prove her friend's innocence. It's nice to see that Eve's social circle is growing a little and it seems like now she's opened herself up to Roarke she's finding it easier to let other people in too. I really like Peabody and think she's going to be fun as the series continues but Mavis is probably my favourite of her friends. Eve and Mavis are so completely different but their friendship just works and I love how supportive they are of each other. Eve never doubts Mavis's innocence and she will do whatever it takes to prove it to the rest of the world.

I'm having a lot of fun reading this series and I'm excited to have so many more books still to read before I get caught up.