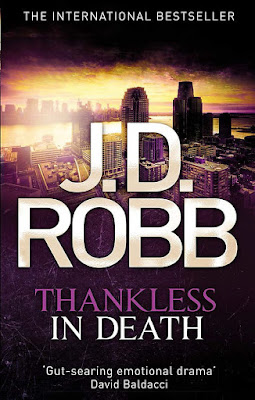 He looked at his hands, covered with her blood, at the wild spatters of it on the walls. An artist, he mused. Maybe he should be an artist.

As NYPSD Lieutenant Eve Dallas and her billionaire husband Roarke prepare for family and friends to descend, an ungrateful son, Jerald Reinhold, decides to shut up his nagging parents - for good.

Soon Jerald is working his way through anyone who has ever thwarted him in his path to an easy life. While a frustrated Eve struggles to consider all the potential victims, Jerald stays one terrifying step ahead.

As the holiday begins, Eve is desperately focussed on identifying which victim will be next on Jerald's list . . .

Review:
It isn't often that Eve Dallas knows almost instantly who her murderer is but this one has done very little to hide his tracks. Jerald Reinhold brutally murdered both of his parents, stole their money and is now hiding from the police. At the same time he is working through a very long list of people who have ever wronged him, from the teacher who didn't give him a passing grade because he failed to put the work in, through to the girlfriend who dumped him after she caught him stealing from her, Jerald has a list and everyone on it needs to die. Eve knows who the killer is but he's already changed his appearance and got hold of a fake identity so finding him isn't going to be quite as straightforward as it should be but she needs to work fast before he can kill anyone else.

I love the way each of Eve's cases are so different, sometimes the reader knows who the killer is before Eve does, sometimes it's a surprise right until the big reveal and other times we all know from the beginning just who the bad guy is and we're just waiting for Eve and her team to bring him down. If I have one complaint about this instalment to the series it was that I really didn't enjoy spending so much time in the killer's head. We usually see the results of the murders but it's not so often that we have to suffer through the torture and death alongside the victims and that made for quite difficult reading.

I know we're not supposed to like any murderer but I really couldn't stand Jerald, he's such a whiny little man-baby who refuses to take responsibility for a single thing that has happened in his life. He fails at school and it's obviously because the teacher hated him, his girlfriend dumps him and she's a bitch, it's got nothing to do with the fact he stole all her money and punched her after she confronted him about it. There really was nothing redeemable about his character which made it all the sweeter when Eve and the others FINALLY brought him down. I was definitely cheering at the thought of him in an off-planet prison for the rest of his miserable life.

Skipping all the scenes from the killer's point of view this was just as fantastic as any other instalment of the series. We have all the humour and team banter that I've come to love, Roarke's family is in town for Thanksgiving and they're always a hoot and we even had a medal ceremony that was both really funny and very touching. Eve and Roarke continue to be my favourite power couple and I'm getting nervous that I'm going to run out of books soon.