Review: Christmas in the City - Anthology 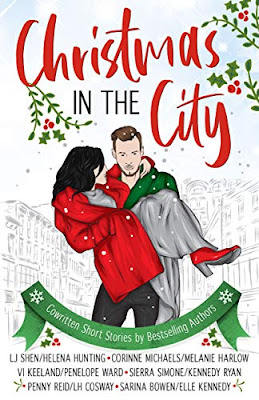 Twelve bestselling authors have come together to brighten your holiday with six ALL NEW co-written novels. Travel through six cities and fall in love with these enchanting love stories.

L.J. Shen & Helena Hunting
Just The Tip
It’s not every day you meet a stranger who knows how to jingle your bells…

Corinne Michaels & Melanie Harlow
Baby it’s Cold Outside
My Christmas list did not include a broken heart, freezing temperatures, or my tree stuck in the door to my apartment building, but that’s what I got. Just when I thought Santa had failed me, I got something I never thought to ask for …

Vi Keeland & Penelope Ward
Kissmas in New York
It was just supposed to be a simple kiss with a stranger. I'd done it to prove a point--that I hadn't lost my sense of adventure. But you know what they say about the best laid plans. Maybe I'd get something in my stocking after all this holiday season...

Sierra Simone & Kennedy Ryan
The Christmas Crown
Noelani, queen of Manaroa, has one mission on her diplomatic visit to the States: forge strategic alliances for her homeland. When she meets brooding security specialist Brock Grimsby, their unexpected alliance heats up the holiday. One night. No promises, but come Christmas, will either be able to walk away?

Penny Reid & L.H. Cosway
Songbird
Two lonely souls find companionship in Dublin for one magical night. Broderick Adams doesn't mind his solitude, until she walks in. Ophelia Kelly sings to heal her heart, but has no idea he's listening.

Sarina Bowen & Elle Kennedy
EPIC
Jamie and Wes are having a blast living and working in Toronto. Until a scout for another team swoops in to make one of them an offer that might complicate the life they've built together.

CHRISTMAS IN THE CITY is a holiday gift as a thank you! It is available for a LIMITED TIME!

Review:
Christmas in the City is a collection of six novellas written by twelve bestselling authors being offered free for a limited time. Overall this is a great collection and it contains some really sweet Christmas stories so I'd definitely recommend grabbing a copy while you can!

I've read and loved books by Helena Hunting before so I had high hopes for this story but unfortunately it ended up being a total miss for me. There were loads of editing errors that were REALLY noticeable (particularly to me as a Brit but perhaps not so badly for an American) and kept throwing me out of the story but even without those I can't think of a single thing I enjoyed about this story. The romance was ridiculous (he proposed within hours of meeting her!), the humour missed the mark every single time and had me rolling my eyes so hard that they nearly fell out of my head so I came very, very close to DNFing the story even though it's only short.


Baby it's Cold Outside by Corinne Michaels and Melanie Harlow

This story restored my faith in the anthology and actually ended up being my favourite in the collection. Corinne Michaels and Melanie Harlow are both new to me authors but I've already gone on to read one of their full length books (Imperfect Match, which is loosely linked to this story and you can actually get a free copy of via a link included in this ebook!). Baby it's Cold Outside had everything I want from a holiday short story, it's a perfect Christmas romance that was sweet, hot, full of holiday cheer and had that feel good factor that leaves you with a smile on your face.

This was another fun and sweet Christmassy story about a woman who is dared by a friend to kiss a stranger. I'm not going to say much more because it would be too easy to give spoilers but I liked both of the main characters and thought they made a great couple. As a bonus the authors have included a link to download one of their other co-written books, British Bedmate, completely free. I really like their writing style (I've read a couple of Christmas shorts by them now) so I'm looking forward to trying a full length novel by them too.

All the King's Men Duet:
Kingmaker
The Rebel King
The Christmas Crown (Novella in the Christmas in the City anthology)
The Killer and His Queen (2020)

I was a bit nervous starting this one as it's linked to the author's All the King's Men duet which I've not read before BUT that wasn't an issue at all and I really enjoyed Noelani and Grim's novella. It was slightly less Christmassy than the previous two stories but it made up for that with the super high heat level and boy do these two have fantastic chemistry! I've added the original duet to my wish list so I can spend time with Lennix & Maxim (who are just briefly mentioned in this story) but I'm also incredibly excited that we're going to get to see more of Noelani and Grim in a new novella The Killer and His Queen which will be released next year.

Songbird is about two lonely people who spend a magical evening together one Christmas Eve, it was a sweet story and I really liked both of the main characters but it just felt a little rushed and unfinished. I wanted more about these characters and what would happen to them so would love to read a further book / novella connected to this one.

Him Duology:
Him
Us
Epic (Novella in the Christmas in the City anthology)

This story is part of the Him duology about couple Jamie and Wes. I was a bit nervous going in because I've not read the rest of the series but I thought they were absolutely adorable! I'm sure I'd have enjoyed this one even more if I was already invested in their relationship but this DEFINITELY made me want to go back and read Him and Us so it totally worked as a hook for the series. I was disappointed that a story in a Christmas anthology had absolutely nothing to do with Christmas though, it was set in March so would probably have been more suited to an Easter anthology LOL.

Source: Downloaded for free via Amazon