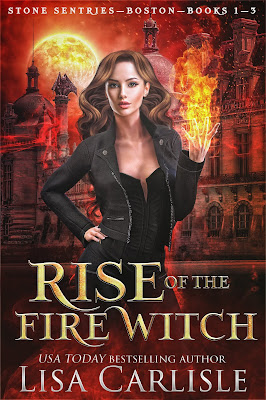 Is she dangerous? Or is she in danger?

A steamy forbidden romance trilogy between a shifter and a cop!

Roman, Commander of the Stone Sentries, is on high alert as he patrols from a Boston rooftop. The eclipse of the red Supermoon bodes danger. When a blast of dark magic soars past him, he tracks a beautiful, mysterious woman.

Larissa has spent her entire life trying to be normal--even if it's given her insight as a police officer. But, she’s different--she can sense things before they happen. It doesn't help her the night she meets Roman, however. A harmless fling turns into something much more dangerous.

What she discovers about Roman is shocking enough. But, when she learns the secrets of her past, she's blindsided by the truth.

Get three action-packed, steamy romantic adventures in this hot new collection! Don't miss the Rise of the Fire Witch trilogy featuring Larissa and Roman's story in:

Review:
Rise of the Fire Witch is a bind up collection containing the first three books in the Stone Sentries Boston series by Lisa Carlisle. I'm going to review each of these stories separately below but this was a fun paranormal romance series that you should definitely check out if you're curious about gargoyles!


Tempted by the Gargoyle: 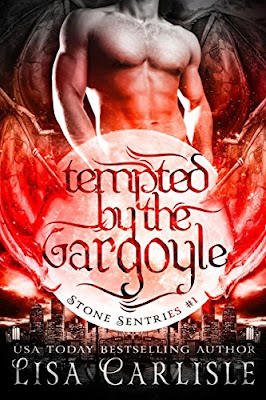 Tempted by the Gargoyle is our introduction to this world and both of the main characters Larissa and Roman. Larissa is a police officer who has been suffering with PTSD ever since the Boston Marathon bombing, she loves her job but feels guilt over the people she couldn't save that day, especially her best friend Janie, a fellow officer who was badly injured in the explosion. Larissa has always been sensitive and long ago learnt to trust her gut instincts but while her ability may warn her trouble is coming it doesn't always give her enough information to stop it from happening.

Roman is the Commander of the Stone Sentries in Boston, they are a group of gargoyle shifters who do their best to watch over the city and protect the innocent humans living there. The eclipse of the red supermoon has them on high alert, they sense danger is coming but are still trying to tract down the source. Roman senses something about Larissa and he's not sure if she's involved with what's about to go down or an innocent bystander so he decides to follow her.

This was a really fun introduction to this series, I really liked both of the main characters and what we've seen of this world is really interesting so far. I've not read many books with gargoyle main characters so that was a bonus and I found Roman's abilities really intriguing. I hope we'll find out a lot more about him and the rest of the Stone Sentries as the series continues. I thought they had great chemistry from the minute they met and I was totally on board with Larissa's idea to take a walk on the wild side and have a one night stand, the night they spent together was hot and I could easily see them wanting to spend more time together.

If I have one complaint it was that some things felt a little rushed. I get that this is a relatively short instalment but since there are three books about these two characters I would have liked their romance to have been drawn out a little longer, things are quite serious between them already and that didn't feel realistic with them knowing each other less than 24 hours. I also felt like Larissa accepted what she learned about herself and her heritage a bit too easily and I definitely struggled to believe the way she was able to gain control of abilities she didn't even know she had pretty much instantly. In spite of those issues I do have high hopes for this series and I'm definitely looking forward to spending more time with Larissa and Roman in the next two stories.


Enticed by the Gargoyle: 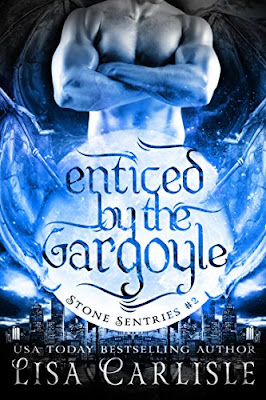 Enticed by the Gargoyle picks up Larissa's story as she tries to explain a demon attack to her bosses, it goes down about as well as you can expect and she quickly finds herself placed on leave until further notice. It's not like she doesn't have plenty of other things to deal with though, she's just found out that she comes from a long line of witches but has no training on how to use her abilities, and she's still got to try and figure out a way to save her best friend Janie from the incubus induced coma she's currently in.

Roman and the rest of the gargoyles are also on high alert as they're still sensing demon activity in the city even though the portal has been closed. He is determined to keep his mate safe but when Larissa starts pushing him away he's forced to watch over her from a distance.

This is another action packed instalment of the Stone Sentries Boston series, there is plenty of danger from demons and we also get to learn more about Larissa's family background and see her start to embrace her abilities.

The one thing I didn't like so much was the way Larissa and Roman's relationship seemed to take a step backwards. They lost the chemistry from the first book and spent most of this one bickering which was disappointing since you'd really expect them to be in that honeymoon period. I was really annoyed by Larissa, she says some incredibly hurtful things to Roman when she was under the influence of dark magic that left him questioning everything about their relationship. That was completely out of her control but when she starts to come back to herself and realise what she'd done her first move should have been to immediately call Roman and apologise. Instead she just ignores it leaving him heartbroken for longer than necessary.

I do want to see them work things out though so I'm hoping the next story will be the best one yet.


Captivated by the Gargoyle: 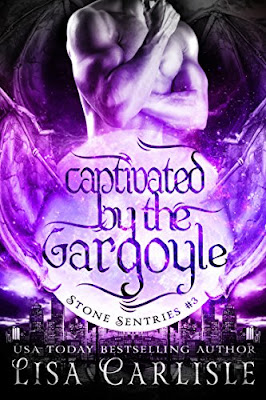 There's only one demon left on this side of the portal and it's clear that Janie is it's main target. Larissa doesn't know why it is so determined to take her friend but when the worst happens she is determined to do whatever it takes to save Janie's life. Luckily Roman and the other Stone Sentries are willing to help but this is one battle that won't be easy to win.

Captivated by the Gargoyle is the final instalment in Larissa and Roman's trilogy and it was just as action packed as you'd expect. The stakes are higher than ever here when Janie is abducted by the demon king and trying to save her could end up costing Larissa and her friends everything.

I've really enjoyed seeing Larissa come into her powers, she's still learning exactly what she's capable of but she's come a long way and is getting stronger all the time. I was also pleased with the way the romance has developed between Larissa and Roman, they've both made mistakes along the way, and Larissa in particular had a lot of growing up to do but by the end of the book it felt like they were in a great place relationship wise. It was fun seeing the beginnings of a romance start to blossom between Janie and Arto, Roman's second in command. I think they are really cute together and I'd love to read a book about them both!

Rise of the Fire Witch is only available on kindle but you can purchase the stories separately as paperbacks: