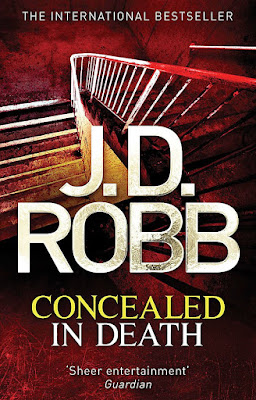 Between the wall he'd opened and the one barely a foot behind it lay two bundles wrapped in thick plastic. But he could see, clearly enough, what they were . . .

There is nothing unusual about billionaire Roarke supervising work on his new property - but when he takes a ceremonial swing at the first wall to be knocked down, he uncovers the body of a girl. And then another - in fact, twelve dead girls concealed behind a false wall.

Luckily for Roarke, he is married to the best police lieutenant in town. Eve Dallas is determined to find the killer - especially when she discovers that the building used to be a sanctuary for deliquent teenagers and the parallel with her past as a young runaway hits hard.

As the girls' identities are slowly unravelled by the department's crack forensic team, Eve and her staunch sidekick Peabody get closer to the shocking truth...

Review:
Roarke's latest project includes renovating an old building which is nothing unusual but finding the bodies of 12 murdered girls hidden in the walls is definitely unexpected. They may have been killed five years ago but that isn't going to stop Eve from doing everything in her power to find out what happened to them and bring their murderer to justice.

Concealed in Death was a bit different to Eve's usual case because it involves historical murders and the killer seems to have dropped off the radar. Usually a killer like this would have continued to escalate so Eve needs to find out why they stopped, perhaps they left the area and have continued their killing spree elsewhere, or perhaps they're in prison on a different charge. Either way Eve wants to find justice for the victims and to give their families a little peace knowing that the killer won't be able to harm anyone else in the future.

While this story seemed a little slower paced than most of J.D. Robb's books I actually enjoyed seeing Eve work on a historical case, she has much less evidence to work with and it's not so easy to find witnesses but Eve and Peabody put the effort in and are rewarded for that. It's hard to call the ending satisfactory but I can't really say why without giving spoilers, I'll just leave it by saying the victims get a different kind of justice than normal and leave it at that. As always I loved the interactions between Eve and Roarke, Peabody brings her usual humour to the series and I liked the introduction of a new forensic anthropologist too, Dr DeWinter did a great job of pushing Eve's buttons. I think what I appreciated most about this book is that J.D. Robb is still finding new ways to shake the series up even though we're 38 books in now, it's not easy to keep a series fresh for that length (I can't think of any other author's who have managed it!) and I'm still as excited as ever to carry on reading.