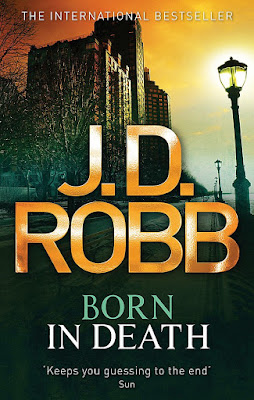 Eve wasn't sure what it said about her that she was more comfortable in the morgue than a baby boutique. And she didn't care. The scent of death was the familiar.

Rushing to the murder scenes of a tortured young woman, Eve is far more at home than when organising best friend Mavis's baby shower.

And then one of Mavis's guests - the young, pregnant Tandy - disappears into thin air. Eve steps in, but when the facts begin to blur with the earlier murders, she unearths a chilling trail of deception and cold-blooded greed, leading to a terrifying hunt to find Tandy before time runs out.

Review:
I don't think we've ever seen Eve quite so out of her depth before but trying to organise Mavis' baby shower taker her completely out of her comfort zone. Especially when she has to go into a baby store looking for a present! One of the reasons I love this series so much is that there is a lot of humour mixed in amongst the death and murder. The friendship between Eve and Mavis has always been fab but it's been even better since Mavis asked Eve and Roarke to be her birthing coaches. The two are absolutely terrified by the prospect but Eve will never let her friend down no matter how uncomfortable it makes her.

This story sees Eve take on a missing person's case when Mavis' friend Tandy goes missing just days before she's due to give birth. Eve doesn't usually get involved unless someone is already dead but now she has the chance to try and stop anything happening to Tandy if she can only figure out why she was taken.

I always enjoy the murder mystery side of J.D. Robb's plots but really the star of this book was Mavis. The scenes with the baby shower, the birthing classes and finally the main event and her new arrival were all just perfect with the exact right amount of humour and heart. Eve and Roarke had me in stitches laughing at their utter panic as Mavis went into labour but it ended with lots of warm and fuzzy feelings. I love this series so much and I'm so ready to dive into the next book!