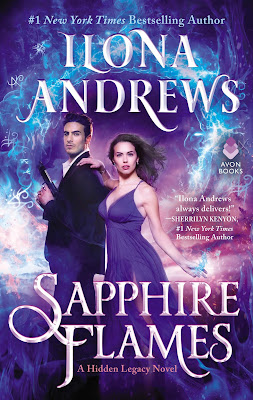 In a world where magic is the key to power and wealth, Catalina Baylor is a Prime, the highest rank of magic user, and the Head of her House. Catalina has always been afraid to use her unique powers, but when her friend’s mother and sister are murdered, Catalina risks her reputation and safety to unravel the mystery.

But behind the scenes powerful forces are at work, and one of them is Alessandro Sagredo, the Italian Prime who was once Catalina’s teenage crush. Dangerous and unpredictable, Alessandro’s true motives are unclear, but he’s drawn to Catalina like a moth to a flame.

To help her friend, Catalina must test the limits of her extraordinary powers, but doing so may cost her both her House–and her heart.

Review:
If you go into this book looking for more Nevada and Rogan you're going to be disappointed because this is very much the start of Catalina's trilogy and the focus is on her and the rest of the Baylor family. And that's not me trying to be negative or put anyone off reading because I absolutely loved Sapphire Flames and think fans will too, I really love how much Catalina has changed and grown in the three years that have passed since events in Diamond Fire. She's a force to be reckoned with and so is Alessandro, they're definitely going to be a power couple and I'm sure I'll come to love them both as much as I do Nevada and Rogan.

Anyone who knows me should know I'm obsessed with Nevada and particularly Rogan, I'm totally addicted to their books (I've read them all well over 10 times each now!) and yes, I would have been happy to read many, many more books from Nevada's point of view. Having said that I'm still glad that they've been given their HEA and I'm happy that we'll get to see glimpses of it in Catalina's story. I think Ilona Andrews deliberately kept them pretty absent from this book to allow readers to get used to the change in narrators and I think that was the right thing to do. There is a reason for their absence and we do still get small hints of what is going on with them now but this is Catalina's time to shine and she does it brilliantly.

I've already mentioned that it's been almost three years since Nevada's wedding and the formation of House Baylor. Catalina is now head of the house and they're just about to run out of the 3 year grace period where no other houses were allowed to attack them. Their enemies are circling and Catalina has been doing her best to form allies and build their reputation as a house that shouldn't be messed with. It's not easy though and in a lot of ways they're still a little known entity that other more established houses don't really take too seriously. Catalina has spent years training with her magic thanks to help from Rogan's mother and she's grown a lot in confidence in that time too. She's still quite shy and would rather avoid confrontation but at the same time she is very protective of her family and will do whatever it takes to keep them safe, even if it pushes her completely out of her comfort zone.

I don't want to give away too much of the plot of this story but there is plenty of action, hints of more than one future romance and all the humour you'd expect from this series. The Baylor family is as crazy as ever but they're also just as close knit. Nevada was so much older than her sisters and cousins that she had a very different relationship with them than Catalina does so I really enjoyed seeing how Catalina works alongside Arabella, Bern and Leon. All four of them are more grown up now and they're all coming into their own both magically and in a sense of finding their purpose. We may not see much of Nevada and Rogan but other familiar faces are still in full play from Cornelius and Matilda through to Augustine, Bug and Linus Duncan.

Alessandro obviously has a lot of secrets but I'm enjoying the banter between him and Catalina. I love how dorky she can be sometimes and that he finds it so endearing and I really enjoyed learning more about his magic. He has some impressive skills and I think we're only beginning to touch the surface of what both he and Catalina are capable of. Theirs is the kind of slow burn romance that Ilona and Gordon excel at and I can't wait to watch it grow into something explosive. It won't be easy to knock Nevada and Rogan off of my top couple spot but I have a feeling that Catalina and Alessandro may be able to do it!

The only thing even slightly disappointing about this book is that I can't have the rest of the trilogy immediately but even that isn't something I can really complain about as I'll have so much fun rereading the previous books while I wait for the next ones to release. My Hidden Legacy obsession hasn't dialled back even slightly with the change of narrators, in fact if anything it's grown even stronger.