Review: Lost in You - Lexi Blake 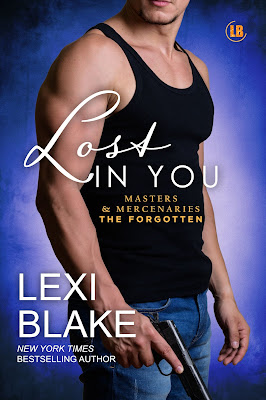 Ariel Adisa is a force to be reckoned with. Her performance in Toronto proved she’s more than just a brilliant mind, but Robert still acts as if she is a wilting flower who needs his protection. Joining him on the mission to Munich should be the perfect opportunity to test their skills and cement their relationship. She and Robert are an excellent match. But when a stunning secret from Robert’s past is revealed, their world is turned upside down and nothing will ever be the same again.

While they chase dark secrets across Europe, Robert and Ariel realize that the only thing worse than not knowing who you are could be discovering who you used to be...

Review:
Lost in You is the third book in Lexi Blake's spin off from the Masters and Mercenaries series about the lost boys who were rescued by McKay-Taggart. The men all lost everything when their memories were wiped by evil scientist Hope McDonald and they're all still trying to figure out who they were and where they came from. In the meantime they've become as close as brothers and they all look up to Robert as their leader. Robert is determined to help his brothers find out who they are, he wants to find out exactly what was done to them and stop it from ever happening to anyone else but he's pretty much given up on the idea of finding anyone from his own past. He'd rather focus on the future he is longing to build with fellow team member Ariel.

We've seen the connection between Robert and Ariel throughout the first two books but for some reason Robert has always been holding himself back. Now we start to realise that he's terrified of hurting her. He doesn't remember his old life but he suffers with awful nightmares and he knows there is a darkness inside him that he doesn't want to taint Ariel with. Ariel has been in love with Robert for months but she's also afraid of what will happen if he ever gets his memory back. Could he have family out there waiting for him? Would he still love her if he could remember his past? The questions plague her and make her wary of committing to a relationship with him. But they've been circling each other for so long now and something has to give, once they've crossed that line it'll be impossible to step back over it.

The group is still surrounded by danger on all sides as rogue CIA agent Levi Green is still trying to get hold of the drugs that wiped their memories. He wants to recreate the experiments using American soldiers but the lost boys and McKay/Taggart will stop at nothing to prevent that from happening. They are also focused on trying to get hold of any information they can about McDonald's experiments, partly to stop it falling into enemy hands but also so they can try to figure out a way to reverse the damage that was done to them. With their enemies closing in, and Ariel keeping some pretty dangerous secrets, things are officially about to go FUBAR.

This was definitely my favourite book in the series so far, I loved the romance between Robert and Ariel but I'm also really enjoying getting to know the other lost boys better and it's been really interesting to see them slowly starting to uncover more about their pasts. There are some HUGE revelations in this book, ones that completely took me by surprise, and I'm already desperately waiting for the rest of the series. The ending made me think Tucker's book is next which I'm really excited for but I also hope we're going to see a lot more of Esra and Solo soon.