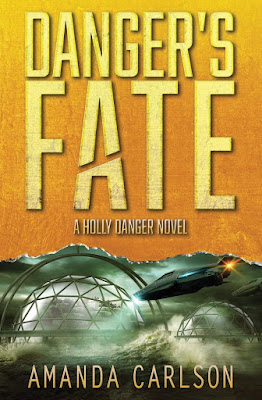 Upon receiving the urgent missive, confirming the existence of the Flotilla, there’s nothing left for Holly to do but rush to their aid. Hundreds, if not thousands, of lives are at stake. But the government, now run by her crew, are holding back their efforts. Betraying them could mean the start of a bitter feud, just when the dark city has a chance to regain its lost resources.

Alaria Bancroft is in the fight of her life—against her father and his trusted followers. After cutting the hydro-farms loose, they’re in jeopardy of being lost at sea. To complicate matters, the biospheres are broken beyond repair and food stores are rapidly dwindling. If help doesn’t arrive soon, they all die.

Ari’s only option is to sneak back into the floating city, in one last attempt to save as many as she can. When Holly arrives, the two have to work together, but it might be too late…

Review:
When an urgent message for help confirms that the floating flotilla still exists Holly and her crew have no choice but to mount a rescue operation, even if their fledgling new government is determined to stop them. Alaria has done everything she can to protect her people from her father's increasing madness but they're nearly out of supplies and with the hydro-farms no longer attached to the main flotilla they are at increased risk of starvation unless Ari risks it all to ask outsiders for help.

Danger's Fate was a fab instalment to the Holly Danger series, we've heard rumours about the flotilla since early in the series but this is the first time we have confirmation that the floating city is still out there. Holly and her crew take a huge risk flying out over the water but with thousands of lives at risk, and a potential trove of new technology that could help survivors across the city, they have no choice but to attempt a rescue.

This was the first time we've had another narrator alongside Holly and I really loved Ari's voice. We're introduced to a whole new group of characters as one major story arc of the series ends and another is set to begin. I've really enjoyed spending time with Holly, Case, Dax and the others but it was fun to see another way of life aboard the floating ships and I'm looking forward to getting to know Ari and her friends better.

I've been really enjoying this series so I'm very glad it's not over yet and I think there's plenty of excitement to come in the next few books!