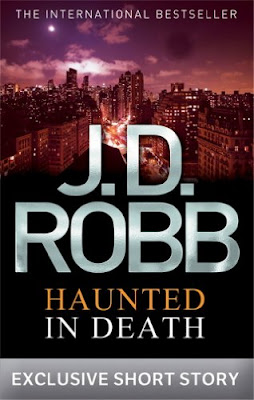 Lieutenant Eve Dallas doesn't believe in ghosts. But everyone else is spooked by the supposedly haunted abandoned nightclub where a very recent corpse has just shown up - alongside the bones of the famous missing singer, Bobbie Bray. As grandson of the original owner, Radcliff C. Hopkins was planning to reopen the nightclub and cash in on its notoriety. But his grandfather is rumoured to be the one who killed Bobbie. Did Bobbie's ghost finally get her revenge, or is there a more earthly explanation?

Set between Memory in Death and Born in Death.

Review:
Haunted In Death is a novella available either as an individual ebook, or, as a bind up in print or ebook, that also includes the novella Eternity in Death. I read it as part of the bind up but I'm reviewing both stories separately as I'm reading the whole In Death series in order & haven't got as far as the second novella yet.

In this story Eve is investigating a murder at a supposedly haunted nightclub, a very old skeleton was discovered at the same time as the fresh body and it looks like the two murders might be connected even though they happened decades apart.

This was a fun and quite spooky little story and a great addition to the In Death series. With all the strange goings on at the nightclub Peabody and the others, even Roarke, start to suspect it could really be haunted. Eve is far too practical to believe in anything supernatural but even her nerves are tested a time or two and there were some hilarious conversations where she is bemused by the people around her suddenly talking about ghosts and life after death.

Haunted in Death Kindle Or Bind Up Paperback / Kindle that also includes Eternity in Death: 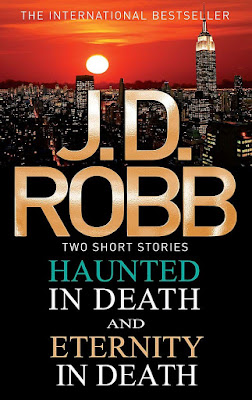