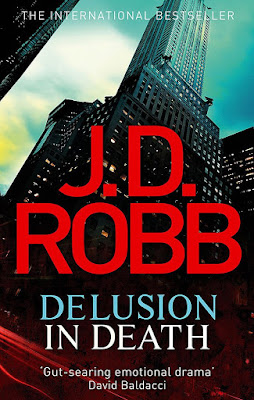 'What would cause someone to want so many people, surely many of them strangers, to slaughter each other?'

The scene that greets Lieutenant Eve Dallas one terrible evening in New York is more shocking than she has ever witnessed. The downtown bar is strewn with bodies - office workers who have been sliced, bludgeoned or hacked to death with the nearest weapon available, turning on each other in a desperate blinding rage.

As Eve and her husband Roarke - who owns the bar among his many properties - investigate the city, they link the attacks back to the Urban Wars and the chemical warfare used all those years ago. With another slaughter imminent, Eve must turn to unexpected sources to stop a killer pursuing revenge by creating mass carnage . . .

Review:
I'm pretty sure Delusion in Death has the highest body count of any book in the series so far, it definitely counts as a bloodbath that's for sure! With over 80 dead in the first incident and someone using a chemical weapon with a disturbing similarity to something from the urban wars it's only a matter of time before more are killed. Finding the killer isn't easy when you don't know which of your victims was the main target or even if the entire thing was just completely random. Eve and her team are going to have to put a lot of hours in on this one.

I say it with every one of these books but this was another great instalment to the series. While the sheer scale of the killings was horrific I enjoyed seeing Eve and the others putting together the clues to try and figure out who was behind the attacks. It wasn't an easy case for any of them to work but they all did their jobs and worked hard to protect innocent members of the public.

As always it was the characters that really make this series though. No matter how interesting I find the cases I wouldn't be as hooked as I am if I didn't love the characters so much. There was a really moving moment between Eve and Peabody when Eve finally opens up and tells her partner about what happened in Dallas. We even had a pleasant conversation between Eve and Summerset which was pretty shocking. Roarke continues to be my favourite book boyfriend, I just love the way he and Eve care for each other and how protective they get, they're such a brilliant couple. The more In Death books I read the faster I start flying through the series, there's just something so utterly addictive about this world that I'm already dreading catching up with all of the currently published stories and having to wait for the next book like all of the other fans!