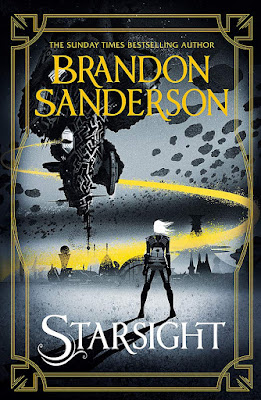 All her life, Spensa has dreamed of becoming a pilot. Of proving she's a hero like her father. She made it to the sky, but the truths she learned about her father were crushing. The rumours of his cowardice are true - he deserted his flight during battle against the Krell. Worse, though, he turned against his team and attacked them.

Spensa is sure there's more to the story. And she's sure that whatever happened to her father in his starship could happen to her. When she made it outside the protective shell of her planet, she heard the stars - and it was terrifying. What she learned turned her world upside down. Everything Spensa's been taught is a lie.

But Spensa also learned a few things about herself - and she'll travel to the end of the galaxy to save humankind if she needs to.

Review:
Starsight is the second book in Brandon Sanderson's Cytonic series and a brilliant follow up to the first book. It took everything I loved in Skyward but then ramped it up a gear and took us in a totally unexpected direction with Spensa taking on an additional role as spy as well as fighter pilot. It's hard because there is so much I want to talk about but I don't want to give even a hint of a spoiler and ruin the story for anyone so I'm deliberately going to keep this review as vague as possible but trust me, if you enjoyed Skyward you're going to love Starsight!

Spensa is such a fun character to spend time with, she's fierce and sometimes a little over-confident but events in this book push her beyond her wildest nightmares. She is so far out of her comfort zone and doesn't have the rest of her flight squad on hand to back her up so she's forced to make some new allies. I'll admit I missed a few of the old faces but M-Bot and Doomslug were on fine form and I loved some of the new characters she meets along the way too (watch out for the Kitsun who happen to be my favourites).

So much is revealed in this instalment about the Krell, about human history and about the entire universe that Spensa lives in. We find out more about her abilities which she ends up testing to the limits, and we spend time with some of the other alien species too. New allies, shock betrayals and so much action really made Starsight impossible to put down. This series is going from strength to strength and I can't wait to get my hands on the next instalment. Please don't make us wait too long Brandon Sanderson, I'm willing to beg or send bribes!