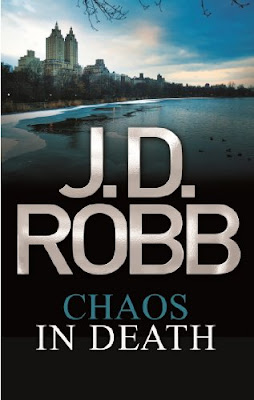 Eve Dallas' latest case is starting off a little more bizarre than usual - a police sketch of a killer based on eye-witness testimony reveals he has green skin, swollen red eyes, goblin ears, and a dislocated jaw-structure that defies the human form. Is it a mask? Is it make-up? Or is the explanation more sinister?

Dallas faces off against multiple suspects - all of them students of medicine capable of precisely slicing the ears, noses, and eyes of the three victims. But who had the motive? More importantly, what kind of rogue science are these healers practicing?

Set between New York to Dallas and Celebrity in Death.

Review:
Chaos In Death is a novella available either as an individual ebook, or, as a bind up in print or ebook, that also includes the novella Possession in Death. I read it as part of the bind up but I'm reviewing both stories separately as I'm reading the whole In Death series in order and these stories don't follow each other chronologically.

Three people have been brutally murdered and of course Eve and Peabody are on the case ready to catch the murderer. The slight snag is that their only witness has described a monster right out of a horror story as the killer. Eve is sure they must be skilled with make up and prosthetics but the question is why would they disguise themselves that way? Aww the killing spree continues and the killer seems to be devolving Eve is in a race against time to find them.

What I love most about these novellas is that they're always a little bit weird and creepy. They have all the characters I love, plenty of suspense and action but the answers are never completely straightforward which always throws Eve for a loop as she's very much a black and white kind of person who if she can't see it then she doesn't believe it. This was another great instalment that left me ready to dive into the next book. 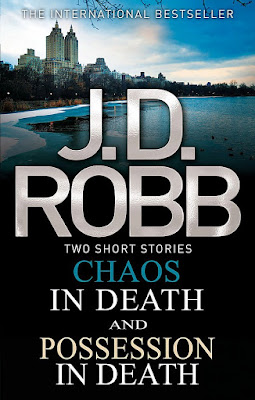 Chaos in Death Kindle Or Bind Up Paperback / Kindle that also includes Possession in Death: