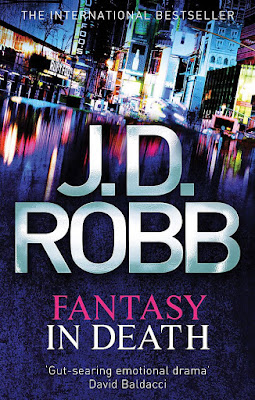 Murder did that. Took lives, crushed others. But why? Money. Jealousy. Revenge. Secrets. Passion. Whatever the answers, the method had been bold and complex.

They were best friends, driven by a shared vision to rule the world of virtual reality games. Their newest invention, developed to transport the player into a fantastical virtual world, is about to be launched. But suddenly, Bart, the brains behind it all, is found brutally killed - defeated by his own game. Their close-knit group is torn apart. Who could have engineered such a devastating virtual death?

Even Eve Dallas, New York City's most cunning investigator, is thrown. But as she peels back layers of secrets, revenge and misplaced allegiances, she realises the depth of the killer's master plan. And she knows his game is far from over . . .

Review:
When Bart Minnock, co-founder of U-Play software company, is murdered in his private holo-suite it's up to Eve to solve the mystery. Computer logs to both the holo-suite and his home show nobody else entering or exiting the building but Bart didn't behead himself so it's obvious there is more to the story. Lots of the staff at U-Play probably have the skills to bypass security but it all comes down to motive, who has something to gain from Bart's death?

30 books in and I'm running out of things to say about this series but the fact that I'm still totally addicted to these books having already read so many of them should give you some idea just how fantastic it is! J.D. Robb has a way of always pulling me straight back into this world and I love spending time with not just Eve and Roarke but also all of the side characters from Peabody and McNab through to Feeny, Mira and beyond. I've come to know them all so well now that picking up a book in this series is like visiting with old friends, well apart from the murders anyway.

I really enjoyed the mystery of Fantasy in Death, the murder was extremely well carried out and the killer was pretty good at covering their tracks to make sure they wouldn't get caught. But Eve is always one step ahead of the bad guy, she's like a bloodhound and nothing will stop her from hunting down her prey. I'll keep this review short and sweet, this was another fantastic book in one of my favourite series and I'll leave it there because it's time for me to start reading the next one!