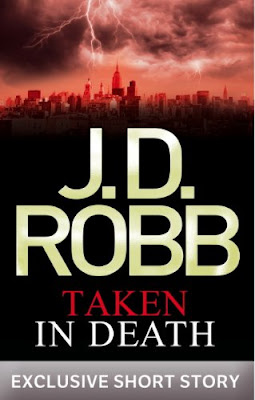 'The evil witch killed Darcia. Henry knew it because he'd seen Darcia on the floor, and all the blood. Everything felt funny and sleepy and wrong. He knew he was under a spell. The evil witch's magic spell.'

When twins Henry and Gala are kidnapped and their nanny killed, Lieutenant Eve Dallas steps in to take control. But video footage shows what appears to be their mother arriving and leaving with the obviously drugged seven-year-olds. Something is wrong, and Eve, her husband Roarke and her brilliant team are ready to work round the clock to get the children back alive...

Review:
Taken in Death is an In Death series novella that is available in the Mirror, Mirror anthology or as a separate ebook. I read it as part of the anthology (which I'd happily recommend to fans of fairytale retellings) but I'm reviewing it separately too as I know some people aren't interested in anthologies.

This story is J.D. Robb's take on Hansel and Gretel, normally Eve is only involved in investigating murders but after the body of a nanny is discovered the team quickly realise that the children she was looking after have been abducted. Eve finds herself in a race against time to track down missing seven year old twins Henry and Gala before they come to harm at the hands of the evil witch who stole them.

Taken in Death was a really creepy novella with a cannibalistic evil twin and a couple of pretty smart children who are able to leave a trail for Eve to follow. A perfect read-in-one-sitting story that'll give you your Eve and Roarke fix while you're waiting for the next full length book to arrive.

Paperback (In the Mirror, Mirror anthology) / Kindle (on it's own):