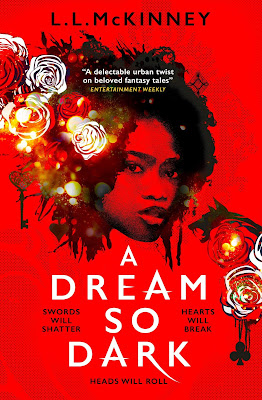 In L. L. McKinney's A Dream So Dark, the thrilling sequel to A Blade So Black, Alice goes deeper into a dark version of Wonderland.

Still reeling from her recent battle (and grounded until she graduates high school), Alice must cross the Veil to rescue her friends and stop the Black Knight once and for all. But the deeper she ventures into Wonderland, the more topsy-turvy everything becomes. It's not until she's at her wits' end that she realizes - Wonderland is trying to save her.

There's a new player on the board; a poet capable of using Nightmares to not only influence the living but raise the dead. This Poet is looking to claim the Black Queen's power - and Alice's budding abilities - as their own.

Dreams have never been so dark in Wonderland, and if there is any hope of defeating this mystery poet's magic, Alice must confront the worst in herself, in the people she loves, and in the very nature of fear itself.

The Nightmare-Verse Series:
A Blade So Black
A Dream So Dark

Review:
A Dream so Dark is the second book in L.L. McKinney's Nightmare-Verse trilogy and it picks up Alice's story immediately from where the previous book left off with Alice trying to explain her latest disappearance to her long suffering and very, very angry mother. As I mentioned in my previous review I really liked the fact that Alice's mum is involved in her life and constantly checking up on her daughter and it's no surprise to see her grounded and pretty much under house arrest after her latest antics. I don't want to say too much but I appreciated the fact that Alice is able to be more open with her mum in this book, it was just a shame that her mum was only really around in the beginning of the story.

In this book we get to spend much more time exploring Wonderland, we meet some great new characters along the way but there were parts of the book where I really found myself missing my favourites from the first book. There were also places where the story dragged a little even though it was fun seeing more of Wonderland and the creatures who live there. The pacing just felt off to me, very slow in the middle and rushed towards the end, and that meant I didn't enjoy this book quite as much as the first one.

The action scenes we do get were fabulous, L.L. McKinney has a way of hooking you in and she makes it really easy to picture exactly what is happening. There are some huge revelations that are going to make the final book really interesting and I'm definitely invested enough in these characters to want to see how their story ends.