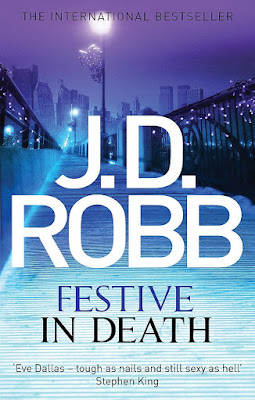 The kitchen knife jammed into his cold heart pinned a cardboard sign to his well-toned chest. It read: Santa Says You've Been Bad!!! Ho, Ho, Ho!

It's Christmas, but Lieutenant Eve Dallas is in no mood to celebrate. While her charismatic husband Roarke plans a huge, glittering party, Eve has murder on her mind.

The victim - personal trainer Trey Ziegler - was trouble in life and is causing even more problems in death. Vain, unfaithful and vindictive, Trey had cultivated a lot of enemies. Which means Eve has a lot of potential suspects. And when she and Detective Peabody uncover Trey's sinister secret, the case takes a deadly turn.

Christmas may be a festival of light, but Eve and Roarke will be forced once more down a very dark path in their hunt for the truth.

Review:
Every so often Eve finds herself investigating the death of someone who almost brought it on themselves and that's definitely the case with personal trainer Trey Ziegler. The more Eve and Peabody find out about their victim the harder it is to have much sympathy for him but Eve is strong believer in justice and as much as she'd have liked to lock Trey up for his crimes he didn't deserve to die for them. The trouble with finding his killer is that so many people had a good reason to want Trey dead and it's hard to narrow down the suspect list.

I happened to read this book at the perfect time of year since not only is Eve hunting a killer but she's also having to shop for Christmas presents and preparing to help Roarke host the party of the year at their home. Eve is never the best at social gatherings so I always find it really amusing to see her out of her comfort zone, especially as Summerset ropes her into helping with the party prep this year and she's forced to deal with arguing party planners and floral arrangements. Present buying isn't her forte either and I appreciate her skill of pretty much one stop shopping and buying gifts for all her friends in one fell swoop. She always puts more thought into the gifts she buys Roarke though and their private celebration and gift swap just made me smile.

It was fun to see all of the familiar faces at the party, especially as we get to see Roarke's friends starting to mingle with Eve's, but it's the quieter moments that have more meaning. Eve definitely appreciates her friends more these days than she did in the beginning, there was a really sweet father/daughter type moment with her and Feeny, Peabody made me laugh with her reaction to a certain gift and I love seeing how happy Mavis and her little family are.

I was less invested in the murder investigation simply because I hated the victim but I had to agree with Eve that he deserved to be locked up for his crimes rather than murdered. I will say that I'd figured out the twist of the killer long before the big reveal but it's very unusual for me to be one step ahead of Eve like that. It's hard to believe that 39 books in I'm more addicted to this series than ever, especially if you look at how many of these books I've binge read this year alone, but I'm totally hooked and already jonesing for my next fix.