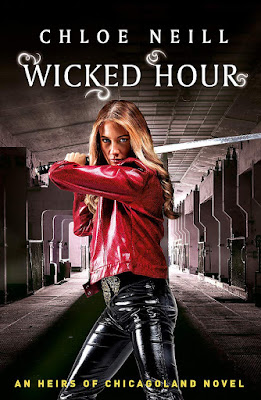 The second pulse-pounding novel in the bestselling Heirs of Chicagoland series sees vampire Elisa Sullivan get drawn into the shifting sands of Pack politics.

As the only vampire child in existence, Elisa Sullivan grew up with a heavy legacy. Alongside shifter Connor Keene - the only son of Pack Apex Gabriel Keene - she faced down a supernatural evil that threatened to destroy Chicago forever.

After the dust has settled, Elisa is surprised when Connor invites her to a Pack event in the north woods of Minnesota, and by the warm welcome she receives from some of Connor's family, even though she's a vampire.

But the peace doesn't last. The shifters tell tales of a monster in the woods, and when the celebration is marred by death, Elisa and Connor find themselves in the middle of a struggle for control that forces Elisa to face her true self - fangs and all.

Review:
Wicked Hour is the second book in Chloe Neill's Heirs of Chicagoland series which focuses on Merit and Ethan's daughter Elisa. As the only born vampire in existence there is a lot that Elisa doesn't know about herself and her abilities and she has nobody else to ask either so she's forging her own path. Her biggest struggle is controlling the darkness inside and it's a battle she's been fighting alone because she doesn't want to worry her parents.

The only person who knows the full extent of her trouble is Connor, her childhood frenemy and the future Pack Apex. Her relationship with Connor has changed a lot in recent months so she is surprised but pleased when he invites her to accompany him to a secret pack ceremony in Minnesota. It's a perfect opportunity for them to spend time together and decide what kind of future they might have but Elisa knows that members of the pack are unlikely to be pleased with the appearance of a vampire at a sacred werewolf ritual.

I'm always impressed with how easy Chloe Neill makes it for readers to step back into this world, I've loved the original series for such a long time now and it looks like I'm going to enjoy the spin off just as much. Elisa is a great character, she's had a pretty privileged upbringing as the pampered princess of Cadogan House but she's worked hard to gain her own independence and spent years living away from her parents. She's worked hard to train as a warrior just like her mother did but she has no plans on working for her parents as she'd rather make her own way. I find the idea of her inner monster really interesting and I'm enjoying watching her fight for control as she tries to figure out how to stop the darkness from taking over.

I really love the banter between Elisa and Connor, they've known each other for their entire lives and spent most of their childhood teasing and fighting each other. They have no secrets and often bicker like the children they once were but at the same time they're building a strong friendship now where they always have each other's backs. The slowly building romance between them has been spot on so far and I can't wait to see what the future holds for the pair of them.

This story was interesting because we got to spend more time outside of Chicago and learn more about life in a werewolf pack. The Minnesota wolves live a fairly simple life but there are definitely different factions building as the older and younger members have very different ideas about how they want the Pack's future to look. Add in the mystery of a killer monster on the loose and things get very interesting for Elisa and Connor.

This series has definitely been added to my auto-buy list and I'm already looking forward to reading more about these characters in the future.