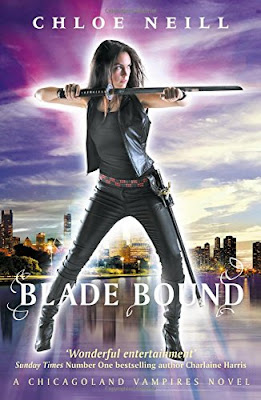 The thrilling final installment of Chloe Neill’s New York Times bestselling urban fantasy series sees a sinister sorcery advancing across Chicago, and it may usher in the fall of Cadogan House…

Since the night of her brutal attack and unwilling transformation to vampire, Merit’s stood as Sentinel and protector of Chicago’s Cadogan House. She's saved the Windy City from the forces of darkness time and again with her liege and lover, Ethan Sullivan, by her side.

When the House is infiltrated and Merit is attacked by a vampire seemingly under the sway of dark magic, Merit and Ethan realize the danger is closer than they could have ever imagined. As a malign sorcery spreads throughout the city, Merit must go to war against supernatural powers beyond her comprehension. It’s her last chance to save everything—and everyone—she loves.

Review:
Its always a sad thing when a series you love comes to an end so Blade Bound is one of those bittersweet books that you almost don't want to read because once its over it's really OVER. I've been a fan of the Chicagoland Vampires for so many years now and I've loved every minute of it. Merit is such a brilliant character and I love her relationship with Ethan. They've learnt a lot both as individuals and as a couple and they've faced all kinds of dangers along the way. I guess it's probably about time that they got to actually enjoy their happily ever after but I still wasn't ready to say goodbye to them.

If you have to leave a series behind you it's definitely best to go out when it's still on a high note though and Chloe Neill has achieved that here. I don't want to say too much about the plot but I'll give you a little hint - there might be a wedding (but only if they survive the hen and bachelor nights first!). Of course bad guys don't take time off for festivities so Merit and Ethan are still up against the clock trying to bring down the mastermind who has been the cause of so many problems over the last few books.

Blade Bound is full of action, there's plenty of the witty banter and humour that I've come to expect from this series and we get to catch up with all of our favourite characters. I'm sad that it's over but what a ride it's been & I know this is a series I'll be rereading in the future. Even better is the fact that Chloe Neill has announced a spin off series! I'm not going to say who the main characters are in this review because it would be a spoiler for anyone who hasn't read Blade Bound so you'll have to investigate yourselves for more information but I'm very excited by the direction things seem to be going. The first book in the spin off is called Wild Hunger and I believe it will be out sometime next year - it's definitely going straight to the top of my wish list the minute I find an official release date!