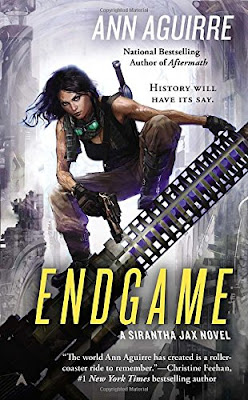 Sirantha Jax has the J-gene, which permits her to "jump" faster-than-light ships through grimspace. She loves nothing more than that rush, but the star roads have to wait . . .

Her final mission takes her to La'heng, a planet subjugated during first contact. Sine then, the La'hengrin homeworld has been occupied by foreign conquerors.

All that's about to change.

Now, as part of a grassroots resistance, Tax means to liberate the La'hengrin. But political intrigue and guerrilla warfare are new to her, and this will be the most dangerous game she's ever played - involving spies and conspiracies, a war of weapons and hearts. And not everyone is guaranteed to make it out alive . . .

Review:
After Aftermath I was a little nervous about reading Endgame, I was worried about the direction certain things went and I wasn't happy at what seemed to be turning into a love triangle between Sirantha, March and Vel. As it turns out I'm actually quite glad that I did read it, if nothing else it means I have closure on the series and there were things I really enjoyed about the story.

To start with the positives I was really pleased to see Sirantha follow through on her promise to Loras to help him free the La'hengrin. They had been treated horrendously by humanity and have been suffering ever since we decided to meddle in their biology so it was great to see Sirantha step up to do something about it. I enjoyed watching Loras lead the rebellion, they're in the middle of an all out war so things aren't easy for any of them but Loras has come a long way from the beginning of the series. Vel as always stands out as a brilliant character and I love the humour that Baby Z always brings to the show.

I'd been really angry with the way things ended between Sirantha and March in the previous book so I was pleased that they manage to turn things around here. At the same time though I do think the way things were resolved just made the drama from the last book feel even more forced and just a cheap way to tug at readers heart strings. If there is one thing I really think ruined this series it's the constant issues between the main couple. They were absolutely fantastic in the first couple of books but from there onwards it's been one thing after another keeping them apart and putting blocks between them. Vel has been one of my favourite characters since the moment he was introduced but I love him as a friend for Sirantha and I think their relationship got far too complicated and blurred a few too many lines for me. I know they've never actually crossed the line completely but I'd have enjoyed it much more if they'd been firm friends and allies all the way through. I just reached the point where I struggled to believe Sirantha's proclamations of undying love for March because she always treated him badly. He wasn't much better at times but at least he usually had better reasons.

I also missed the wider scope of the earlier books, it was so much fun to see them travelling through space and visiting different planets so I got a little bored when they spent the entire book in one place. They had an important mission but I'd have liked it to tie up a little faster and for us to actually see them start their next adventure. Especially because that would have given us a chance to catch up with characters like Dina and Hit who were completely absent from this book. Considering what major characters they were early on it was disappointing that we didn't get the chance to catch up with them one last time in the final book of the series.

Overall for me this series started out amazingly strong and fizzled out a bit in the last couple of books. I still think it was well worth reading, particularly for the AMAZING early books though and I'm looking forward to trying the spin off series too.