As a huge fan of Alyxandra Harvey's writing of course I want to read her latest book. Green Jack is currently completely free (I'm not sure if that's a permanent offer or just a temporary one so you might want to grab it while you can!). You can download a free ebook from Smashwords or read online via Wattpad. 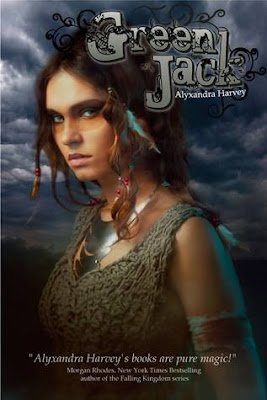 What do Saffron, a scavenger from the Core, and Jane, an Oracle at the Collegium have in common?
The Directorate--and the dangerous magic of a Green Jack's leaf mask.

After the Lake Wars and the droughts, a Green Jack walked out of the forest, and out of legend. Whatever he touched grew, and there was enough food to eat.
But it wasn't enough. Nothing was enough.
Elysian City closed its gates, poisoning the suburbs, fighting the Ferals of the Badlands, and keeping the rebels trapped inside the Spirit Forest.
For a little while.
Because a Green Jack's mask might help the crops grow in the dry months, but it also kills whoever wears it. And recently the masks are rejecting them faster and faster.
And now Saffron has a choice: wear the mask or let a small piece of magic die.
Meanwhile, Jane's family secrets are catching up to her. Her mother offers her to the Directorate's new Program. Survival is optional.
And although the Directorate controls both science and magic, but they can't control everything.
Not anymore.
But if science can't save them, and magic can't save them---how will Saffron and Jane save each other?