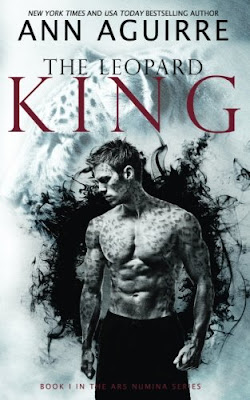 Until three years ago, those words applied to Dominic Asher, the leader of Ash Valley. His family has ruled the feline branch of the Animari for hundreds of years, guiding the pride through perilous times. Unspeakable loss drove him into seclusion, a feral beast nobody can tame. Now he’s wrecked, a leopard king in exile, and he wants nothing more than to die.

Fortunately for Dom, those words still apply to Pru Bristow, his dead mate’s best friend. She’s had her heart broken too, but she never quits. With the conclave approaching, alliances with the Pine Ridge pack and Burnt Amber clans on the verge of collapse, she’s prepared to do whatever it takes to drag their leader back, before his second can start a war.

At best theirs seems like a desperate alliance, but when their mate bond turns hot and fierce, there’s no end to the questions and the doubts. Neither of them expects to fall in love. But sometimes people don’t know what they’re looking for until they find it.

Review:
When Dom's mate was murdered his grief sent him into a tail spin, unable to cope with his loss he walked away from the rest of his pride and has been living in seclusion for the last 3 years. Pru was Darlena's best friend and was also devastated by her death but she has been sent to bring Dom home to lead important peace talks with the other races to help prevent all out war. The pride need Dom and Pru will do whatever it takes to convince him to come back to them no matter what it costs her.

The Leopard King was a great start to Ann Aguirre's Ars Numina series, I'd like a little more background information about each of the different races but I think that's something that will come with time and we were given just enough in the first book to hook us in without overwhelming us and taking away from the current story. The set up is definitely interesting and there were characters from each of the different factions that I'm totally intrigued by so I'm looking forward to spending more time in this world.

Dom was left broken by the loss of his mate, he didn't cope well with his grief and his world completely fell apart but once he makes the decision to return to lead the pride he steps up and takes full responsibility for his actions. He doesn't find it easy to slip back into the role of leader but he accepts help along the way and trusts his people and Pru to help guide him. I loved that he wasn't an over the top alpha, he's a man who is still hurting but he is trying his best to protect his people. Pru has had her own share of heartbreak, not only did she lose her best friend but she's also spent her whole life being pitied by her clan and rejected by the man she loved because of her latent shifting ability. The fact that she isn't able to take her cat form is something that has been incredibly painful for her and she's always felt worthless because of that so her confidence is low. She's a really sweet character though, someone with a huge heart who cares about everyone around her. She willingly takes on half of Dom's burdens and she's excited to take a bigger role in caring for her people.

What I loved most about this book was that the characters didn't instantly fall in love and they weren't fated mates who never had struggles in their relationship. They both have history with other people that has effected them differently and their mating starts out as friendship with the agreement of mutual support. They both take time to talk to each other setting ground rules and then work through any issues as they come up. They both have insecurities but whenever one of them is worried about something they talk about it like adults and they both put the work in to make their relationship a success. It was so easy to believe that their friendship was blossoming from respect and caring to attraction and eventually love.

We have been introduced to characters from each of the different factions and I've already made guesses about which ones will be getting books of their own and in some cases who the romances will be with. The great news is that they're all characters I'm interested in spending more time with and I'm definitely looking forward to seeing where the action takes us next. The Leopard King has it all - great characters, interesting world building, plenty of action, a nice amount of romance and some hot sexy times. It's just what I look for in a paranormal romance and the rest of the series is going on my must buy list.