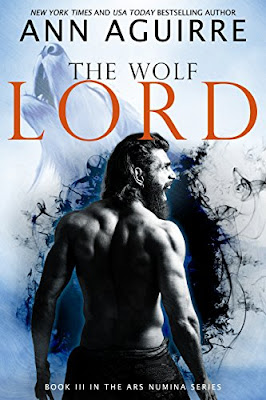 Raff Pineda has a certain reputation among the Animari. He’s the one to call if there’s a party starting, not the man to rely on when all hell breaks loose. Though he’s nominally the leader of the Pine Ridge pack, he defers to his second on the tough calls. Raff prefers to live fast and hard and keep his heart hidden, but a certain Eldritch princess won’t fall for his usual tricks, and their contract political marriage may be anything but convenient.

Princess Thalia Talfayen may not have been raised by a witch in a tower, but she’s spent the last few decades locked up for a failed insurrection. Plotting and scheming come naturally to her; personal connections do not. Since she’s come this far in her unstoppable quest to claim the silver throne, she won’t hesitate to do whatever it takes to unite her people, even if that means giving herself to the big bad wolf...

Review:
Thalia is a princess of the eldritch but her father was a traitor and she's spent the last decade locked away from the world. She's determined to claim her rightful place as queen and prevent her people falling into civil war, all she wants is to be a fair ruler and fix the damage caused by her father and the people he allied with. She can't do it alone though and she doesn't have enough of an army to claim the throne so she proposes a marriage alliance with the leader of the Pine Ridge animari wolf pack. Raff is leader in name but has spent years putting off taking as much responsibility as he could, letting his second make all the important decisions. He only became Alpha after the death of his older brother and has never felt worthy of the position so he prefers to spend his time partying. A war is coming though and if he can help bring he eldritch and animari together then they might stand a chance of winning against their common enemy.

This series is just getting better and better, what starts as a marriage of convenience between two strangers quickly morphs into so much more as Thalia and Raff get to know each other. They're both wary initially but the treachery they are surrounded by forces them to work together in dangerous situations and that builds bonds fast. I love how respectful Raff is of Thalia, she's more pragmatic and willing to do things just because she feels they need to be done but Raff doesn't want her forced into a corner and is willing to wait for things to develop naturally. They're both very different characters, Raff is much friendlier and warmer while Thalia is initially quite cold and she has been taught from a young age to keep everyone at a distance but once you get past the surface they have a lot in common and she's much more caring than you realise.

Each story in this world does work as a stand alone from a romance point of view but the world is constantly expanding as we learn more about both the eldritch and the animari so I'd recommend reading the series in order. There are lots of world developments here that are going to have an impact on future stories and I'm looking forward to seeing which couple is up next, I have a feeling I've guessed the hero but I'm not 100% sure so that always keeps things interesting.