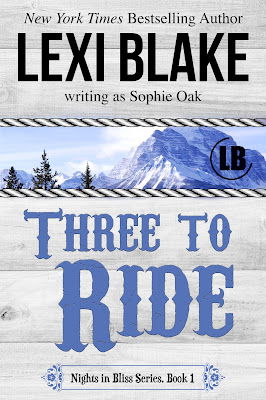 Review:
Three to Ride is the first book in Lexi Blake's Nights in Bliss, Colorado series that was originally published under the pen name Sophie Oak. These stories are being updated with additional content and I can't wait to continue reading the series!

Rachel Swift is on the run from the stalker who has done everything in his power to ruin her life since she turned down a second date with him. Luckily for Rachel she had people who were able to help give her a new identity and she escaped but her stalker is a police officer who has already managed to track her down once so she has no doubt he's still hunting for her. When she arrives in Bliss she's practically out of cash and getting desperate but the town welcomes her with open arms and she slowly starts to make friends. The last thing she intended to do was start dating but it's been so long since she last felt attracted to anyone that surely a fling with Max for the short time she's in town couldn't hurt? Of course that all changes when she realises Max's brother Rye is the local sheriff and that the brothers have a reputation of liking to share their women...

I love menage stories so I jumped at the chance to review Three to Ride even though I'm always more sceptical when it's brothers who are involved, I usually prefer my menage stories to involve no relatives but I was actually surprised at how well it works here. Max and Rye are identical twins who are so close they're practically two halves of one person so it's not really that surprising that they want to continue living intertwined lives like that. Their last menage relationship didn't end well though so they agreed that in the future they'll stick to finding their own relationships, they just didn't realise how hard that could be when they both started to fall for the same woman. Rachel has every reason to be wary of men in general and the police in particular after the spectacular ways they failed her when her stalker became obsessed and drove her from her home so it made sense that she was initially wary of Rye and I really enjoyed watching her relationship develop with Max.

This is my first Lexi Blake book (and I'm kicking myself because I've had a friend trying to get me to read her books for YEARS!) but it definitely won't be the last. I already can't wait for the rest of this series to be reissued but I'm happy that she's got a huge backlist for me to start working my way through. Three to Ride is erotic romance with a cute small town setting, Bliss is full of fun and eccentric characters and I loved how everyone has their own quirks and nobody judges anyone else for their choices. If only there were more places like this in real life, I have to hope they're out there somewhere but I've never found one!