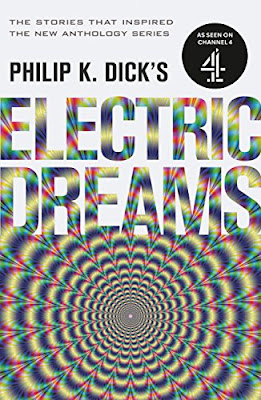 From the visionary writer who inspired Blade Runner, Total Recall, The Man in the High Castle, Minority Report and A Scanner Darkly comes a collection of ten stories to reprogram your mind.

From tales of a wife who suspects her husband may no longer be the same man after returning from a trip into deep space, to a government agent seeking the source behind a recent wave of illegal, telepath-inhibiting 'hoods', these stories investigate what it means to be human in a changing world.

These ten stories inspired the ten episodes of Philip K. Dick's Electric Dreams, the hit TV series from Channel Four and Sony Pictures Television. Each story also has an exclusive introduction by the writers who adapted it for the series, including Ronald D. Moore, Matthew Graham, Jessica Mecklenburg, Tony Grisoni and Jack Thorne.

Review:
Philip K. Dick's Electric Dreams is a collection of the ten short stories that inspired the Channel Four TV series of the same name, each story also comes with a brief introduction from the writer who adapted it for the series which explains their thought process behind any changes they made. I'll talk about each story separately but as they're not printed in the order they're airing on TV I'll also confirm which episode each story relates to. Overall I really enjoyed this collection, it was fun to dip in and out of as I watched the TV show. I've not read anything by Philip K. Dick before but even though the stories were originally published in the 1950s most of them still felt very relevant today so I'm definitely interested in trying some of his full length novels.

The stories included are:

The episode based on this story was called Real Life and was actually very different to the original story in a lot of ways. It's hard to say too much about the plot because there are so many differences but the adaptation captured the feel or the story very well and I enjoyed both versions a lot. It was clever of Ronald D. Moore to make the story feel more modern with the use of virtual reality.

This is the story of a train station ticket clerk whose life is turned upside-down by a commuter who keeps trying to buy a ticket to a destination that doesn't exist. The clerk becomes obsessed with this unknown destination and is determined to uncover the mystery behind his disappearing customer.

This was a really fun story that shows you to be careful what you wish for as it may backfire in ways you couldn't have guessed. I think I liked the adaptation more than the original story, probably because it was set in the UK so the locations were familiar to me, there were a few other changes but I think they did a great job of capturing the essence of the original.

This story is about a wealthy old woman who is desperate to visit Earth before she dies and the two space tourism guides who are willing to take her money even though, like most people, they believe Earth never existed and they certainly don't know how to find it.

I have to admit I didn't love this story, it just felt a little too short and incomplete for me. The TV episode was better in some ways, at least it was a more rounded story, but a lot of things were added and they didn't always work for me. I wasn't convinced by the romantic elements and was a bit confused about some of the other additions but overall I enjoyed the adaptation more than the original story.

4. The Hanging Stranger - adapted by Dee Rees (episode 10: Kill All Others)

This was one of the instances where I ended up enjoying the original story far more than the TV adaptation. The story is about an alien invasion where the episode is more about mob mentality and paranoia but there was never really an explanation for why people behaved the way they did. How did people single out the "others"? It seemed to be that anyone could just randomly accuse someone and then everyone else would jump on board the lynch mob. At least in the original story there was an explanation for why things happened the way they did.

The episode called Crazy Diamond is based on this short story. We ended up watching the episode before reading it which I think was a mistake because the episode completely confused us and neither my Dad or I were a fan of the adaptation. It's a shame because the actual story was really good, one of my favourites from the ones I've read so far! It was a really clever look at consumerism and the way we're constantly bombarded with advertisements trying to sell us stuff we don't really want or need. Considering how long ago this story was written (back in 1954!) it's probably more relevant today than ever and I thought the story ending was hilarious.

The Father-Thing is an invasion of the bodysnatchers type story and it's all about what a little boy does when he realises his father is no longer his father. The episode took the essence of the original story and updated it to a more modern setting which I thought worked really well but I enjoyed both versions. I actually think the show worked a little better because it changed a few things that didn't make much sense to me in the story which made it more believable.

This story is set in a world without much technology but where some people have gained telepathic skills. These teeps have the ability to read minds and they are used by the government to help control the populace. At the start of the story someone starts making protective hoods which allow humans to keep their thoughts private and this causes all kinds of problems.

What I thought was really interesting was that the original story focuses on the human side where people are terrified of what they teeps are capable of and live in fear of having their minds invaded but the TV show focused on the story of one of the teeps and showed how badly she was treated by her government handlers and how much danger they were all in from the public. It was really easy to see things from both sides and it raised interesting questions both about people's rights to privacy and about the way humanity has a terrible tendency to focus on our differences rather than our similarities.

I think this was probably one of my favourite stories from the collection, the two versions are very different but the essential essence remains the same with big businesses & the government playing on people's fear and paranoia to make them spend money buying things they don't really need. In the original story it's all about people buying bomb shelters to protect themselves in case of a future war while the TV series is set further into the future where technology has a bigger role to play in people's lives.

I think Human Is was probably my favourite story (and adaptation!) so far, it's about a pretty neglectful husband who travels to a distant planet and comes home like a completely different person. I don't really want to say too much more than that but it was an interesting look at what it means to be "human" and I really enjoyed both the original story and the adaptation, they were very similar but had slightly different endings. I actually think Jessica Mecklenburg came up with an even better ending than the original even though they were both very similar. I'd happily watch this episode again.

I really enjoyed that story, it's set in a post-apocalyptic world where machines have taken over production worldwide and are eating up the few remaining resources at a horrifying rate. Loved how different the story was to the adaptation, they started the same but went in very different directions and it's hard to decide which version I preferred. Clever messages about consumerism and being careful what you wish for!