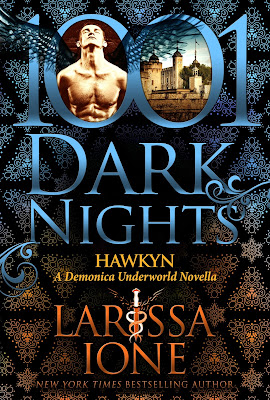 As a special class of earthbound guardian angel called Memitim, Hawkyn is charged with protecting those whose lives are woven into the fabric of the future. His success is legendary, so when he's given a serial killer to watch over, he sees no reason for that to change. But Hawkyn's own future is jeopardized after he breaks the rules and rescues a beautiful woman from the killer's clutches, setting off an explosive, demonic game of cat and mouse that pits brother against brother and that won't end until someone dies.

Aurora Mercer is the half-wytch lone survivor of a psychopath who gets off on the sadistic torture of his victims. A psychopath whose obsessive psyche won't let him move on until he kills her. Now she's marked for death, her fate tied to that of a murderer…and to a sexy angel who makes her blood burn with desire…

**Every 1001 Dark Nights novella is a standalone story. For new readers, it's an introduction to an author's world. And for fans, it's a bonus book in the author's series. We hope you'll enjoy each one as much as we do.**

Review:
Hawkyn is a memitim, a special kind of guardian angel who was raised by humans and whose sole purpose in life is to help protect primori, humans who have an important role to play in heaven's plans for humanity. His main goal in life is to do enough to earn his place in heaven so that he can have a role in improving the lives of his fellow memitim siblings and if that means protecting a serial killer until he can complete his destiny then no matter how distasteful he finds his duty he will do it to the best of his ability. That is until the day his charge targets Aurora and Hawkyn finds himself compelled to step in and save her. Now Aurora has a target on her back and Hawkyn is torn between duty and desire and forced to make an impossible choice.

I've been a huge fan of Larissa Ione's Demonica series for years now and although you don't have to read the entire series to enjoy the Demonica Underworld books I'd highly recommend them all. No-one creates demons quite like Larissa does and I love the way she blurs the lines so her demons aren't always quite as bad as you'd think they should be and the good guys aren't perfect either. She has a knack for building a great connection, both emotionally and physically, between her characters in a short space of time too so even with her novellas I never find her relationships are rushed or unbelievable.

Hawkyn and Aurora are a great match, he is driven by duty and wants to make life better for his memitim siblings but at the same time he is fighting an overwhelming need to keep Aurora safe. Aurora is a wytch - kind of like a cross between a witch and a succubus - and quite a powerful one at that. She's spent her life trying to be independent from her family and forge her own path but she never expected to attract the attention of a serial killer. She's a fighter though and no matter what life throws at her she does her best to roll with the punches and protect herself. Aurora and Hawkyn fit together really well and I enjoyed getting to know them both. We also get to spend some time in Azagoth's realm and see just how certain changes have been affecting Azagoth and Liliana since their book which I found really interesting. This series is one I'll never tire of, I love diving back into a familiar world, meeting exciting new character but also catching glimpses of old favourites and I'm already looking forward to Her Guardian Angel which luckily releases next month!