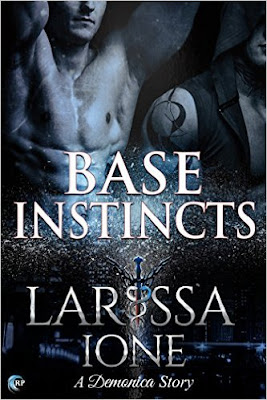 As a Seminus demon, Raze’s life literally depends on having sex with females. The problem is that he doesn’t desire females, and it’s physically impossible for him to be with males. Thankfully, he and his best friend, Fayle, have an arrangement that keeps him alive . . . if lonely. He finds some solace in his work as a medic at Thirst, a vampire club known for its rough clientele. But his carefully structured world turns upside down when he meets a mysterious male who makes him want what he can never have.

Slake is an assassin used to getting what he wants, and what he wants is Raze. But he also wants to earn back the soul he sold when he was a much different demon. All he has to do is capture a runaway succubus named Fayle and hand her over to her family. What he doesn’t count on is being caught himself by a web of lies—and his attraction to Raze.

Raze and Slake must navigate a dangerous world to be together. But as Fayle’s jealousy of their relationship turns deadly, they find themselves embroiled in a battle not only for their love, but their lives and souls.

Review:
Raze is a seminus demon who literally has to have sex with women just to survive so even though he's only really attracted to men he can never have an exclusive relationship with a guy. He likes the healing abilities that his seminus side gives him and loves his job working as a paramedic but he has come to accept that he will never be happy in his personal life. Rather than constantly having to find random women to hook up with, like most Seminus demons do before they're mated, Raze has come to an arrangement with his friend Fayle who is a succubus so also has feed off of sex to survive. They have a strong friendship but neither of them are looking for more than that so their relationship has always worked for them both, even though Fayle's possessiveness has become more than a little awkward.

Slake bartered with his soul for protection from his family, agreeing to work as an assassin and finder for a demon owned law firm for a limited contract and forfeiting his soul if he fails. If he can complete just one more job for them he will earn back his freedom and all he has to do is capture Fayle and bring her back to her family. Unfortunately for him the job is a lot more complicated because of his attraction to Raze, especially when he realises how important Fayle is for Raze's survival.

I've been a fan of this series from the beginning so of course I jumped at the chance of reading Base Instincts. I love that Larissa Ione has included an MM story in the series and I was rooting for Raze and Slake from the beginning. I thought I had a pretty good idea of how things would play out when I picked this up but it wasn't at all what I expected and the resolution to Raze's problem was a really creative one. I'm not going to say more because I don't want to give spoilers but it just goes to prove that there is someone out there for everyone no matter what issues you may have!

Even though this isn't a full length novel Larissa Ione did a great job of making me care about the characters involved, Raze and Slake have both been through a lot in their pasts and there were some nice messages in here about being yourself and not letting other people put you down because they don't agree with your choices. There was perhaps a little less tension than in some of the other books in the series but I didn't have a problem with that and I loved the little cameo appearances from some of the previous characters. Reading Base Instincts reminded me how much I love the seminus siblings and really made me want to go back and start rereading the series from the beginning which to me is the sign of a very good story.

Source: Initially received from publisher via NetGalley in exchange for an honest review