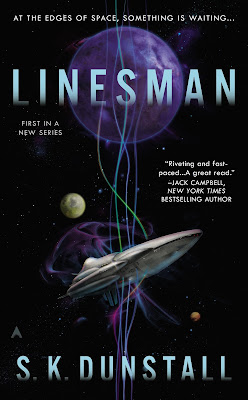 The lines. No ship can traverse the void without them. Only linesmen can work with them. But only Ean Lambert hears their song. And everyone thinks he’s crazy . . .

Most slum kids never go far, certainly not becoming a level-ten linesman like Ean. Even if he’s part of a small, and unethical, cartel, and the other linesmen disdain his self-taught methods, he’s certified and working.

Then a mysterious alien ship is discovered at the edges of the galaxy. Each of the major galactic powers is desperate to be the first to uncover the ship’s secrets, but all they’ve learned is that it has the familiar lines of energy—and a defense system that, once triggered, annihilates everything in a 200 kilometer radius.

The vessel threatens any linesman who dares to approach it, except Ean. His unique talents may be the key to understanding this alarming new force—and reconfiguring the relationship between humans and the ships that serve them, forever.

Review:
Linesman came highly recommended by Ilona Andrews (one of my favourite authors) so add that to the fact that I've been obsessed with stories set in space recently and of course I HAD to read it. I didn't know a huge amount about the story going in but what I found was unique and refreshing and I enjoyed every minute of it.

After discovering an alien technology humans have been able to adapt it to allow long distance space travel. Space ships access the 10 different lines and each of these lines is used for a different ship function, we don't know what all of the lines do but there is one for communications, one for travelling through the void, another controls the engines and a fourth keeps the ship's gravity in check. One thing all the lines have in common is that they need frequent attention and fine tuning to stay functional and there are only a small number of humans who have the ability to work them. As a level 10 linesman Ean is one of the top tier but his eccentricities have made him a bit of an outcast amongst his peers. Other linesmen tune the lines using their mental abilities but Ean finds he has to sing to them to make them do what he needs. Since Ean grew up in the slums and was initially self trained the others feel he is beneath them and they don't believe he is as powerful as they are.

When a mysterious anomaly is discovered in deep space most of the other level 10 linesmen are sent to investigate but Ean is kept home by his boss and instead forced to take over the day to day upkeep of the entire fleet. Ean initially sees this as another black mark against him but once the captains start to realise how skilled he is he soon finds himself in high demand. Then his contract is purchased by a wealthy and secretive business woman and Ean gets much closer to the Confluence than he ever dreamed possible.

I absolutely loved Linesman, Ean was a great character, someone with very little self confidence who suddenly finds himself amidst some of the universe's most influential people and even stranger they're actually listening to what he has to say. He's totally out of his element and has no interested in the political games that are playing out around him, all he really wants is a chance to study the lines and to use his skills to fix them. Ean really steps up when he's needed and I loved seeing how much his character grew throughout the story. There are lots of interesting side characters, some with questionable motives but also some who are surprisingly supportive of Ean. He's made some powerful allies but that has also gained him some equally powerful enemies and he's now walking a very fine line between both sides of a brewing war.

This story had me captivated from beginning to end, I couldn't wait to see how it played out and I was left desperate to get my hands on the sequel. This is a really strong debut from writing duo Sherylyn and Karen Dunstall and I'll be eagerly waiting to see where they take Ean's journey next.