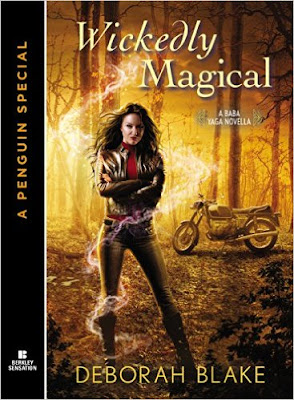 Known as the wicked witch of Russian fairy tales, Baba Yaga is not one woman, but rather a title carried by a chosen few. They keep the balance of nature and guard the borders of our world, but don’t make the mistake of crossing one . . .

Barbara Yager loves being one of the most powerful witches in the world, but sometimes she’d rather kick back in her enchanted Airstream with a beer in her hand than work out how to grant the requests of the worthy few who seek her out.

But when a man appears with the token of a family debt of honor, Barbara must drop everything to satisfy the promise owed by her predecessor—and she isn’t above being a little wicked to make sure the debt is paid in full . . .

Review:
Wickedly Magical is a prequel novella for Deborah Blake's Baba Yaga series, and it does a good job of introducing readers to the world and whetting our appetites for the rest of the series. The author has put her own spin on the tale of the wicked witch Baba Yaga that many people have heard of from Russian fairytales. In this series Baba Yaga is not just the name of one witch, instead it's a title held by a group of powerful witches spread across the world, these women keep the balance and protect the borders between our world and the paranormal realm. Baba Yaga's aren't evil, they're just incredibly powerful and not afraid to use their magic to defend themselves and those they feel bound to protect. You definitely don't want to make the mistake of crossing one, however, if you can convince them you're worthy then they'll be a great ally.

There are three Baba Yagas in the US: Barbara, Beka and Bella. This novella introduces all three but is mainly focused on Barbara who will be the main character in the first book Wickedly Dangerous. I don't want to say too much about the plot but when Barbara is approached by a man claiming Baba Yaga owes his family a debt and asking her to help him get back his lost treasures she doesn't have much choice but to honour a promise her mentor made many years before.

I'm actually surprised by how much the author managed to pack into a 73 page story, she did a great job of introducing the three Baba Yagas and their companions, gave a good idea about the kind of magic they are able to perform and was able to wrap up a satisfying paranormal mystery. Wickedly Magical definitely did it's job of hooking me in and making me want to continue reading and I'm looking forward to seeing where things go from here. I have very high hopes for the series!