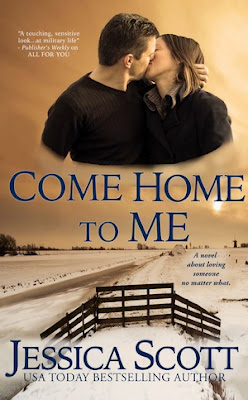 PREVIOUSLY PUBLISHED AS ALL I WANT FOR CHRISTMAS IS YOU

From USA Today Bestselling author Jessica Scott comes an all new novella about a woman who came back from war changed and the man who loves her enough not to let her go.

All Major Patrick MacLean wanted was Christmas with the woman and child who were his family in everything but name. But Captain Samantha Egan has come back from the war a different woman than the one who left - and she doesn't know if she can love him anymore.

But neither of them counted on the determination of a little girl they both call daughter and if Natalie has her wish, her parents may have no idea what's coming for them. It's going to take Christmas miracle to bring these two wounded warriors back from the edge of a broken heart.

This story has been featured in Home For Christmas: A Holiday Duet with JoAnn Ross.

Review:
Jessica Scott always writes such incredibly realistic military characters, it's so obvious that she puts part of her own experiences into her stories and that makes them feel all the more real. In Come Home to Me (which was previously published as All I Want for Christmas is You) we meet Captain Samantha Egan not long after she has returned home from a tour of duty where she saw her best friend die in front of her. She's grieving as well as suffering with PTSD and she isn't coping very well so she's packed up her daughter and moved back in with her parents looking for support.

Major Patrick MacLean may be the love of Sam's life but she doesn't know how to connect with him anymore so she finds it easier to walk away rather than try to deal with her issues. Patrick isn't about to give up on the woman he loves though, he knows exactly what she's going through and he knows that burying her head in the sand will only make it worse.

I'm not going to say too much more about the plot but this was a really emotional story about finding your way back to yourself and the people you love. Jessica Scott makes it very easy to feel exactly what both of the characters are going through and you can't help but root for them to make things work. This i perfect Christmas read that shows what's really important in life and it's a great introduction to the author's writing since it's the start of her Homefront series.