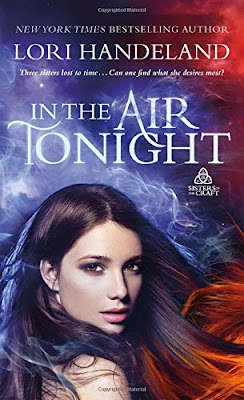 Four centuries ago, in a small Scottish village, three baby girls escaped the wrath of a witch hunter. Today, one young woman will learn about her secret history, her heart's destiny, and the sisters she never knew she had . . .

With her blue-black hair and dark eyes, Raye Larsen has never fit in with the Scandinavian community of New Bergin, Wisconsin. Being adopted is part of the reason she feels like an outsider, but what really sets Raye apart is her ability to see dead people. Everywhere. She's learned to keep her visions to herself . . . until she stumbles onto the ghost of a murder victim who needs Raye's help. Enter Bobby Doucet, a distractingly handsome homicide detective who has been tracking a killer all the way from New Orleans. Could this be the break in his case he's been looking for all along? Meanwhile, the deeper Raye gets involved with the case--and with Bobby--the closer she comes to unlocking the mystery of her own origins. What she discovers about herself could destroy everything she knows . . . and everyone she loves. Is finding the truth worth the risk?

Filled with dark magic, dazzling romance, and dire suspense, In the Air Tonight is the first book in a thrilling new series by New York Times bestselling author Lori Handeland.

Sisters of the Craft Series:
In the Air Tonight
Heat of the Moment
Smoke on the Water

Review:
I have mixed feelings about In the Air Tonight, on one hand I had a lot of problems with the characters but on the other I liked the backstory of the three sisters and I am curious to see what happens next so I do think the series has potential.

I think my main issues were with Raye, I had sympathy for her for the way everyone treats her so differently in the small town where she grew up, but I struggled to understand her motives for staying in a town where everyone is so mean to her. It's not like she even had a good relationship with her father, in fact there was more than one occasion when I really wanted to shake some sense into that stupid, stubborn man. Raye was adopted and she's never quite fit in, with her dark hair she looks very different from the rest of the people in her very Scandinavian hometown. The fact that she has the ability to see ghosts just marks her as even more different, although that is a secret she has been keeping since she was a child and overheard her father threatening to send her back where she came from. Her father was horrible and apart from her best friend most of the people in her town weren't that nice either so why was she still there? It didn't help that she came out with some completely ridiculous things, you can have characters who are ditzy in a funny way but she was just cringeworthy at times. I was embarrassed on her behalf and laughing at her for all the wrong reasons half of the time.

I didn't mind love interest Bobby but he wasn't the best male lead I've ever come across. I did like his reaction to the town Raye lived in and I enjoyed seeing him struggle to come to terms with the supernatural but he wasn't quite enough to save the book and I felt like the relationship between him and Raye was really rushed and not particularly believable. I think what I would have loved was a slower build up between them and more time spent getting to know each other. I also wanted to see more time spent with Raye either rebuilding a relationship with her father (he did show a little potential towards the end of the book) or for once in her life actually standing up to him and walking away.

The supernatural side of the story was interesting, particularly finding out where Raye had come from and what had happened to her parents, but I wanted to see more of that. The pace was a little slow in the beginning but that evened out a lot towards the end and I have hopes that the next book will give us more details. I'm also hoping that since each book is going to be told from the point of view of a different sister I'll like the other characters more and find them easier to relate to than Raye. It's not that I hated Raye, I just didn't particularly love her either.

Overall I'd say that In the Air Tonight is a story that didn't quite live up to it's potential but that I do think the series could be about to get interesting. I'm going to give Heat of the Moment a try and I'm hoping it'll have more of the world building and less of the issues that this one had.