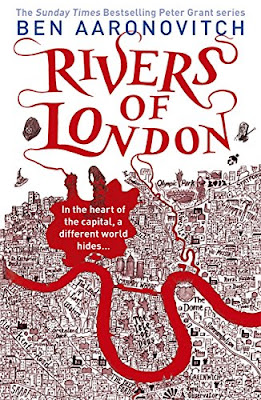 "I used to be a probationary constable in that mighty army for justice known to all right-thinking people as the Metropolitan Police Service, and to everyone else as the Filth . . ."

Meet DC Peter Grant. He will show you his city. But it's not the capital that you all see as you make your way from tube to bus, from Elephant to Castle. It's a city that under it's dark surface is packed full of crime. And of magic. A city that you never suspected . . .

Grant's story starts when he tries to take a witness statement from a man who was already dead. And takes him down a twisting, turning centuries' old mystery that reckons to set modern London on fire . . .

Review:
When probationary Police Constable Peter Grant is left to guard a murder scene nobody expects him to find a witness to the crime, especially not a one who also happens to be a ghost. Peter quickly gets recruited to a super secret police unit that was set up to deal with supernatural problems, his new boss is a wizard and Peter now has a lot of new training to do. Suddenly Peter finds himself caught up in a side to London that he'd never seen before, one where ghosts are probably the least unusual creatures he has to deal with and it isn't only humans who can commit murder.

Rivers of London is a fantastic start to the Peter Grant series and I can now completely understand why my friends have been recommending Ben Aaronovitch to me for such a long time. He is incredibly skilled at bringing London to life on the page and if you're even slightly familiar with places like Covent Garden you'll be able to picture exactly where Peter is throughout the story. Alongside the London we know and love the author has created a darker hidden world of magic and supernatural creatures and I think we've only just begun to scratch the surface of what's really out there.

The police procedural side to the story is very realistic and that just adds more depth to the story and makes the weird and wonderful parts feel so much more likely, you'll almost find yourself wondering if the author has stumbled across a world that the rest of us don't know about and is actually writing these books from experience. There is plenty of humour to lighten up the tone and I laughed a lot while reading the story. Peter is a great character, I love the way he's not the best at his job and is completely out of depth when he finds out that he is a wizard. He's much more interested in finishing work for the day and heading down the pub for a pint where he'll also try and chat up his friend and fellow PC Leslie than he is in trying to further his career path. I can't wait to see what Peter gets up to next & I'm looking forward to continuing this series.