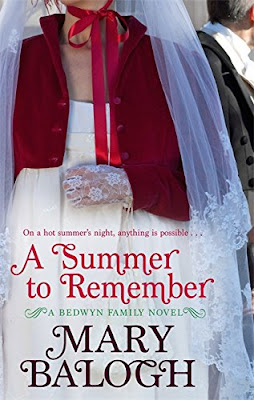 Kit Butler, cool and dangerous, is one of London's most infamous bachelors and marriage is the last thing on his mind. Desperate to thwart his father's matchmaking, Kit needs a bride . . . fast. Enter Miss Lauren Edgeworth . . .

A year after being abandoned at the altar, Lauren has determined that marriage is not for her. When these two fiercely independent souls meet, sparks fly - and a deal is hatched. Lauren will masquerade as Kit's intended if he agrees to provide a passionate, adventurous, unforgettable summer. When summer ends, she will break off the engagement, rendering herself unmarriageable and leaving them both free. Everything is going perfectly - until Kit does the unthinkable: he begins to fall in love. A summer to remember is not enough for him. But how can he convince Lauren to be his . . . for better, for worse, for the rest of their lives?

Review:
I felt quite sorry for Lauren when I was reading One Night for Love, after all it wasn't her fault that the man she was about to marry already had a wife and being left at the altar would be rather humiliating for anyone! So, I was glad when I found out we were getting to read her story next and I think I ended up enjoying A Summer to Remember even more than the first book.

After having her heart broken Lauren has pretty much given up on the idea of love and marriage, instead she's decided she's going to remain a spinster and she's making plans to move forward with life on her own terms which I thought was incredibly brave of her. Before she moves to a little cottage of her own in the countryside somewhere she is facing one last season in London, blithely ignoring the gossips and playing the part of a perfect young lady because a friend is relying on her.

As the second son Kit never expected to inherit the family title and he's been happy with his carefree life able to do what he wants when he wants. Then the unthinkable happens and his brother dies and now Kit is faced with returning home to pick up the reigns as his father's heir and even worse be forced into an arranged marriage with the woman who rejected him so long ago. Kit may not have a choice about his duties but one thing he absolutely will not budge on is marrying Freyja, she chose his brother over him once and he's not going to let her come back to him now that she knows he'll inherit everything. So, Kit decides it's time to choose his own bride and on a dare from his friends he picks Lauren since she has a reputation as a bit of an ice maiden and he can never resist a challenge.

I have to admit I was fully prepared to dislike Kit from the moment he made the bet but thankfully he comes clean to Lauren about it very quickly. After discussing his situation like the adults they are Lauren offers him a deal, she'll accompany him home and pretend to be his fiance for the summer if he gives her a few weeks of adventure and passion before she settles down to a quiet life on her own. Kit is more than happy to agree but his plans soon change when he starts to fall for the fun loving woman who has been hiding behind her frosty facade.

I really loved both Kit and Lauren, their relationship builds slowly and was very believable and I enjoyed seeing Kit push Lauren out of her comfort zone. She had been through so much but she was tough as steel and I was really proud of her for the way she stood up for herself, particularly around Freyja. These two books have been a prequel for the Bedwyn Saga but I have to admit it they haven't really shown the Bedwyn siblings in a particularly great light. Freyja in particular is a nasty piece of work but her brothers haven't been much better and it's not really making me want to dive into the rest of the series. Friends keep telling me I'll be pleasantly surprised when I get to know them though so I'm going to give them a chance and if they end up being as good as the prequels then I'll have discovered a new favourite historical romance series.