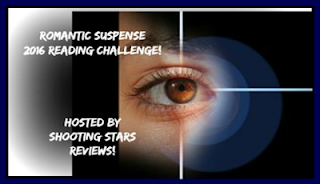 The Romantic Suspense Reading Challenge was created by The Book Vixen but for 2016 it is being hosted by Shooting Stars Reviews. If you'd like to join me and take part in the challenge you can find the details and sign up HERE.

I've noticed in the last few months that I seem to be reading more romantic suspense than I ever did before so I've decided to join this challenge for the first time and see if that encourages me to read even more.

I'd been aiming for 20 books in 2015 but I didn't come close to achieving that, I'm going to keep the same goal for 2016 though so let's see if I can actually manage it this time!

I will update this post to include links to my reviews as I post them and you can find links to other participant's reviews HERE: