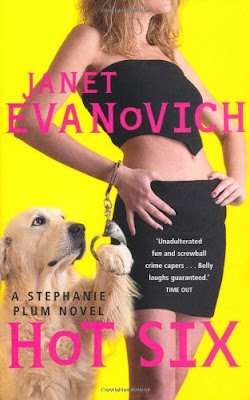 Big-haired bounty hunter Stephanie Plum is back - and, boy, has she got man-trouble . . .

First there's fellow bounty hunter Ranger, currently on the run from a murder rap and requesting Stephanie's help. Trouble is she can't decide if she should turn him in or keep him for herself.

Then there's sexy vice cop Joe Morelli - the man her heart says she's in love with (even though her head says otherwise). He's after ranger too - but for less romantic reasons . . .

And now there's another man in her life. He's big, he's orange and he howls when he's left alone.

Sexual temptation, homicidal maniacs, car crashes and doughnut addiction are all part of Stephanie Plum's daily routine. But they pale into insignificance when Grandma Mazur moves in . . .

Review:
Janet Evanovich has done it again, she made me snort coffee out of my nose and she left me with stomach ache from laughing so hard. This is without a doubt one of my favourite comedic series and I'm enjoying it just as much on a reread.

Stephanie is one of the most completely clueless bounty hunters you'll ever come across, you'd think she might be getting the hang of things by now but really she just blunders along in her own little world seemingly catching the bad guys by accident. I know she's a klutz and I know she's totally hopeless but I can't help it, I love her anyway! Her sassy attitude and snark is a constant source of amusement and her crazy family and fun sidekicks just add to the hilarity. Grandma Mazur gets a lot of page time in this book and I love that nutty old bird just as much, you can definitely tell which side of the family Stephanie takes after.

Just when you think Stephanie has her love life sorted something comes along and mixes it up, in this case it's her growing attraction to Ranger and his darkly seductive flirting that sends her pulse racing. Ranger is in trouble and for once he's the one who needs Stephanie's help. He's been set up for murder and it's up to our hapless heroine to try and prove his innocence, something which is definitely easier said than done. Then you have Morelli, he's her on again / off again lover and while their relationship might currently be in the off position he's not given up on changing that. In fact he's going all out to win Stephanie around to his way of thinking.

Throw in a deranged arsonist, a rather large dog who will eat anything, two newly destroyed cars, and a new permanent houseguest and Stephanie is way out of her depth. I don't think I'll ever get enough of these books and I can't wait to read the next one!