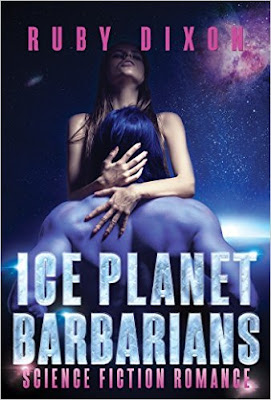 You'd think being abducted by aliens would be the worst thing that could happen to me. And you'd be wrong. Because now, the aliens are having ship trouble, and they've left their cargo of human women - including me - on an ice planet.

And the only native inhabitant I've met? He's big, horned, blue, and really, really has a thing for me . . .

Review:
It hasn't been a great week for Georgie, first she gets abducted by aliens who want to sell her as a sex slave, then when the alien ship starts having technical problems, they abandon her and all the other female prisoners on a snow covered planet. The women have no food and very little in the way of clothing, they're terrified and traumatised and it's up to Georgie to try and figure out a solution for them. They have no idea if the alien ship will return for them, and to be honest they're kind of hoping that it won't, but that means trying to survive in a rather inhospitable environment.

Georgie is brave enough to go searching for food but she wasn't expecting to bump into a rather large, horned blue alien who seems to think she's his mate. Vektal recognises Georgie immediately as the woman who is meant to be his but can he convince her that his tribe will protect her and the others from the aliens who abducted them and can she ever accept him as her partner?

I was already a paranormal romance fan but who knew venturing out into alien smut would be such a fun experience? Ice Planet Barbarians is ridiculous, hilarious and surprisingly hot. I definitely wasn't expecting to develop a crush on a big blue alien but I think I might just add Vektal to my book boyfriend list - I don't even mind the fact that he comes with horns and a tail!

Georgie is a nice enough character but Vektal completely stole the show, he's an alien caveman with a super sweet side and boy does he know what he's doing under the furs. I'm thrilled that this is the start of a series and can't wait to read more about these big blue aliens and the women that make them resonate.