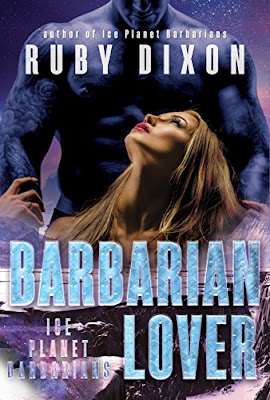 As one of the few humans stranded on the ice planet, I should be happy that I have a new home. Human women are treasured here, and one alien in particular has made it clear that he wants me. It's hard to push away the sexy, flirtatious Aehako, when all I want to do is grab him by his horns and insist he take me to his furs.

But I've got a terrible secret - the aliens who abducted me are back, and thanks to the translator in my ear, they can find me. My presence here endangers everyone...but can I give up my new life and the man I want more than anything?

Review:
I really do love these hunky blue aliens (who doesn't need some alien smut in their lives sometimes?) and Aehako is my new favourite. He's just such a funny, easy going guy who doesn't take himself too seriously. I wasn't so sure about pairing him up with Kira at first, she's always been the most standoffish of the women and I was worried she'd bring Aehako down, but they ended up working really well together.

I liked Kira a lot more than I expected to when I learned about her backstory and it was pretty heartbreaking that she was expecting to be rejected by the clan when they found out that she can't have children. Aehako has been drawn to Kira from the moment he saw her, he doesn't care that they haven't resonated for each other because he's convinced that she's the only woman for him and he's determined to prove it to her. Kira is more reluctant though, what if she gives Aehako her heart and then he resonates for someone else in a few months or years time and abandons her? I loved Aehako's reaction when he realises that Kira can't have children and that's whats holding her back, he doesn't care if that means they'll never have kids of their own he just wants Kira to be his.

My favourite moment was when Aehako presents Kira with a courting gift. Only Liz would manage to convince an alien that it's traditional for human men to present the women they're interested in with a carved replica of their own penis and only Aehako would see the funny side of her playing that trick on him. His reaction was just priceless and I laughed out loud throughout that whole scene. It just showed how sweet and funny Aehako is.

This story isn't all about the romance though, there is also a bit more action thanks to the return of the aliens who originally kidnapped the women and brought them to Not-Hoth. Kira still has the translator implant in her ear that they gave her on the ship and she can hear that they have retuned and are searching for them. She's worried that the translator will have a locator chip that will allow them to find her and she's terrified about leading the aliens to the rest of the group so she decides to go off alone and confront her enemies. Of course Aehako isn't going to let her leave without him but with only primitive weapons they're no match for the other aliens so it's going to take all of Kira's smarts to figure out a way to defeat them.

Barbarian Lover was definitely my favourite book in the series so far. I do have one complaint about something that happened to Kira right towards the end of the book but I can't really talk about it without giving spoilers, it was something I had guessed pretty early on would happen but I was disappointed when I was proved correct. I just don't think it sent the right message to other women out there who can't have children (or don't want them) and I would have loved this book even more if Ruby Dixon hadn't taken the obvious route to give this couple their HEA. It's a fairly minor niggle in the grand scheme of things though and I'm still really looking forward to continuing the series.