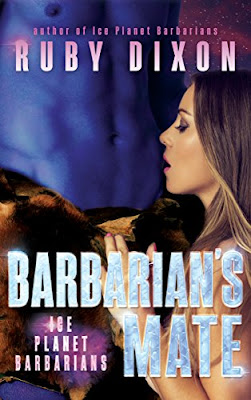 'Resonance' is supposed to be a dream - that's when your soulmate is chosen for you. And everyone on the ice planet has hooked up with a big, hunky soulmate of their own... except me. So do I want a mate? Heck yeah. More than anything, all I've ever wanted is to be loved by someone.

Except that the soulmate chosen for me? My least favorite person on the darn ice planet. Haeden's the most cranky, disapproving, unpleasant, overbearing male alien... so why is it that my body sings when he gets close? Why is he working so hard to prove to me that he's not as awful as I think he is?

Review:
I'm a huge fan of this series so it pains me to say that this book was probably my least favourite so far. Haeden was fantastic but my god Josie drove me insane for a large chunk of the book! She was selfish and self-centred and absolutely refused to talk to Haeden about what was bothering her. I'm really not a fan of pointless drama that could be solved with a single conversation being dragged out for half the book and that came close to ruining this story for me which was disappointing.

What was most irritating is that I understood why Josie was so reluctant to give into the resonance between her and Haeden but it was frustrating that she was so desperate for a family but refused to even give him a chance. There had been a huge misunderstanding between them and it could have been really fun to see them go from enemies to lovers but Josie stomps off on her own like a child having a tantrum putting her life and Haeden's in danger and I just wanted to shake her.

Luckily things improve in the second half of the book when Josie FINALLY agreed to talk to Haeden and I am glad they worked things out in the end but it was a little too long coming in my opinion and I just felt that Haeden deserved better from his mate.