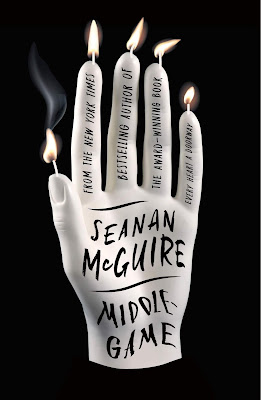 Meet Roger. Skilled with words, languages come easily to him. He instinctively understands how the world works through the power of story.

Meet Dodger, his twin. Numbers are her world, her obsession, her everything. All she understands, she does so through the power of math.

Meet Reed, skilled in the alchemical arts like his progenitor before him. Reed created Dodger and her brother. He’s not their father. Not quite. But he has a plan: to raise the twins to the highest power, to ascend with them and claim their authority as his own.

Review:
I'm a huge fan of Seanan McGuire and once again she shows us a whole new side to her imagination with Middlegame. I will never get tired of reading her books because she is always coming up with something new and different so each of her series are totally unique. I've been trying to write my review of Middlegame for ages now and I'm really struggling to come up with the right words because there is so much I want to talk about but at the same time I don't want to give too much away and spoil it for you. This is one of those books where it's probably better to go in with very little knowledge of what's to come so that you can fully appreciate the journey.

That's probably not enough to sell the story so let me try to give you a bit more information. This is the story of two twins, Roger and Dodger, created in a lab by a mad alchemist and separated at birth they have no knowledge of each other's existence yet they still share a unique and incredible bond. Both of the twins are highly intelligent, Roger is an expert linguist, words come easily to him and he loves literature, he's also a great communicator who finds it easy to make friends and fit in. Dodger on the other hand is a maths genius, words don't always make sense to her and she struggles to connect with people but numbers are something she can always master. The twins are raised by different families on other sides of the country yet they always manage to reach out and find each other.

Meanwhile the alchemist that created them watches on as his experiments age and mature, watching for signs that he was successful. He has big plans for the twins and he will do whatever it takes, no matter how evil, to make sure they come to fruition. I really don't want to say much about what Reed's goals are or how be plans to achieve them though so you're going to have to read the book yourself to find out.

I was fascinated by all of these characters, both the good and the bad. They all have complex motives so even when you hate the actions they take their decisions still make sense. I think Dodger was probably my favourite of all of them though, she was more vulnerable than her brother but at the same time she was more determined and also braver. Roger makes some more questionable choices but when you get right down to it he is just as protective of his sister and wants to make amends for his mistakes.

I get that this review has been very vague but this story is full of twists and turns, it's so cleverly written and you have to pay attention to keep up with the changes in POV but it is so worth the effort. Although it works perfectly as a stand alone I'm so fascinated by this world that I really hope Seanan McGuire decides to write a sequel because I'd love to know more about the alchemists and their goals.