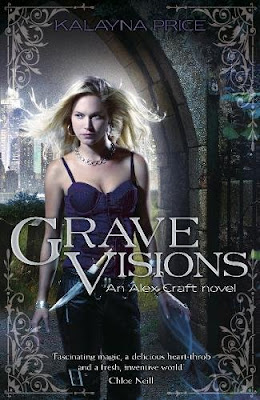 The fourth book in the Alex Craft urban fantasy series about a Grave Witch who can talk to the dead. Perfect for fans of Charlaine Harris and Cassandra Clare.

If you want to hear voices from the dead in Nekros City, you call Alex Craft. She's a Grave Witch with reasonable rates and extraordinary powers, who specializes in revealing the secrets of the dead. But now she's the one fighting to keep her own secret. She's not human - and her newly discovered heritage is causing havoc for her both in the human realm and in Faerie.

But her status as an unaffiliated fae also makes her an ideal candidate to investigate a new street drug that has surfaced in several of the spaces between the human and fae worlds. This glamour-infused drug causes hallucinations that turn real - at least for a while and often with deadly consequences. Searching for the source of this drug - and its purpose - lands Alex front and centre in the conflict brewing in Faerie and she must find answers before she's dragged so deep she loses her freedom.

Review:
I think it was the very long break between the release of Grave Visions and the previous book that led to me loosing track of this series the first time I started reading it but I'm really glad I discovered these books again as it's such a fun series to read. Anyway, I'm glad that I reread the previous three books before jumping into this one because there was just so much I'd forgotten about both the world and the main characters.

This story sees Alex working two different cases that are possibly connected in ways she can't even begin to imagine. Firstly she's still dealing with the fallout of learning that she's half fae and the fact that she has to choose a court to belong to. She's desperate to avoid joining the Winter Court but unless she can get the queen to agree to Alex living in her territory as an independent she will be forced to move away from Nekros City. As Alex has rare abilities the Winter Queen is reluctant to lose her skills entirely but she reluctantly agrees to give Alex independent status IF she finds out who killed one of the Queen's handmaidens.

At the same time she's looking into a string of increasingly bizarre deaths in the city, where the victims have injuries that just don't make any sense. When she discovers the cause is a new street drug that causes the victim's hallucinations to become temporarily real she knows it is vital to uncover who is behind the drug and find a way to stop them. But with the Queen giving her a deadline on her murder investigation and her own increasing ill health things are getting really complicated.

I really enjoyed the investigation side of this story, there's a lot going on and it's interesting watching Alex try to come to grips with her newly discovered fae heritage and how that affects her daily life. I am hoping we'll get a resolution in terms of the love triangle soon though. I like Falin and we see a lot more of him in this book but his ties to the Winter Queen, and the fact that he has already betrayed her once because of those ties, make it very hard to trust him. There's a big gulf between them right now and I don't see any way for them to bridge it unless he somehow manages to break away from the Winter Queen and I really don't see that happening. I actually prefer her with Death anyway but her relationship with him is just as impossible, if not even more so. I just wish Alex didn't hold herself at quite such a distance from everyone, her friends included, I want to see her opening up more and letting people in even though I understand why she's so scared of doing that.

The last few paragraphs of this book were hilarious and have definitely left Alex with a lot of explaining to do so I can't wait to see the fallout in the next book.

Source: Received from Berkley in exchange for an honest review