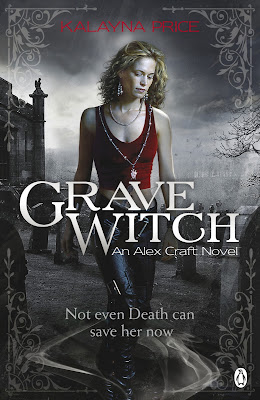 Just because Grave Witch Alex Craft can speak to the dead, doesn't mean she has to like what they have to say . . .

As a private investigator and consultant for the police, Alex has seen a lot of dark magic. But even though she's on good terms with Death himself, nothing has prepared her for her latest case. Alex is investigating a high-profile murder when she's attacked by the ghost she is raising - which should be impossible. Then, someone makes a serious attempt on her life, thwarted only by Death's intervention. You know you're having a bad day when Death is saving your life . . .

To solve this case, Alex will have to team up with tough homicide detective Falin Andrews. Andrews seems to be hiding something, although it's certainly not his dislike of Alex. Despite all that, Alex is going to need his help to navigate the tangled webs of real-world and paranormal politics, and to track down a killer wielding a magic so malevolent, it may cost Alex not just her life, but also her soul . . .

Review:
Alex Craft is a witch and she uses her grave magic to help her in her job as a Private Investigator. Her magic allows her to interact with ghosts but she is mainly asked to contact shades which are like an echo of the person who died - they have the person's memories but no emotions so they can answer questions about their lives but are unable to lie.  Alex works for family members who need some kind of closure and she also works with the police to help allow murder victims to identify their killers.  When her latest attempt to raise a shade results in a ghostly attack that should have been impossible Alex finds herself drawn into a web of dark magic with a serial killer at it's heart.  The closer she gets to identifying the killer the more at risk her life becomes and she must work with detective Falin Andrews to solve the case before her time runs out.

I'm a big fan of the urban fantasy genre so it is always exciting to discover a new series - particularly one as engaging as Grave Witch was.  This was the first book I've read by Kalayna Price but I can't wait to continue this series and I'm also planning on buying her Haven books ASAP.  In the world the author has created the public have been aware of witches and the fae for about 70 years and although there is some prejudice between them and the humans in general they are accepted.  With the Humans First political party gaining popularity this could change in the future though.  I was really interested in finding out about all the different kinds of witches, they each have very different abilities and Alex's grave magic is one of the rarer forms.  There are also all kinds of fae creatures to watch out for.

I found Alex a likeable heroine, her power has limitations meaning she doesn't come across as too perfect to be real and she has a lot of the same worries as normal people do which makes her easy to relate to.  The after effects of using her grave sight were fascinating - especially the developments towards the end - and I thought Alex was brave to continue using the sight considering what happened to her afterwards.  She isn't a perfect PI, in fact she missed quite a few clues along the way, but she is determined and once she sets her mind on something she will do whatever it takes to see it through - even it that does mean bending the rules a little.

Although the story focuses on the murders and the mystery of who is behind them there is also the start of a very promising love triangle.  I have to confess I'd thought that I was sick to death with triangles and that I didn't want to read any more of them but Kalayna has me hooked on this one.  Normally I find it very easy to pick a team and once I've chosen it is very rare for me to change my mind but in this case I still can't tell you who I want Alex to end up with - she has a choice between two very delectable specimens!  First you have Death, a soul collector who she has known since she was a child and has built a friendship with.  He is very much a mystery man and definitely left me wanting to know more but I liked him from the minute he stepped onto the page.  Falin is a detective who also has his secrets that I think we have only just started to uncover.  At first I was annoyed by his attitude but he quickly won me over as you get to see his more caring and protective side.  I'll tell you now I swung back and forth between Death and Falin each time they appeared.  At the moment we know a lot more about Falin but I'm hoping we'll see much more of Death in the next book and his confession at the end of the book left me desperate for more!

Overall I thought that Grave Witch was a great start to a new series and it had me so hooked that I will be picking up the second book as soon as this review is written - that's rare with me as I usually have a break between books in a series.  I enjoyed the mystery, loved the romance and want to spend more time with these characters.  Definitely a series I'll be recommending to urban fantasy fans - particularly if you like witches and the fae.