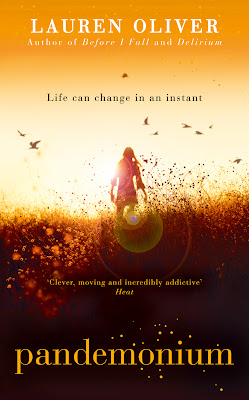 Love, the deadliest of all deadly things.
It kills you when you have it.
And when you don't.

Pandemonium is a poignant, explosive, recklessly romantic and utterly heartbreaking novel. Like Delirium, the first in the compelling trilogy, it will take you to the very edge. That's all you need to know. We'll let Lena do the rest of the talking . . .

Review:
I'm going to assume that if you're reading this review you have already read Delirium - if you haven't then whatever you do don't keep reading because I can't talk about Pandemonium without mentioning a major spoiler for the first book! If you are new to the series then it's one I'd definitely recommend though so make sure you check it out.

OK so now we're down to the people who've read Delirium (last chance to look away if you don't want spoilers!) can I just say how much that cliffhanger ending killed me! It feels like I've been waiting forever to find out what happened to Alex after he was captured. I'm not going to give you any hints about that though so you'll have to read the book for yourself to find out if he survived or not. Now as much as I enjoyed Delirium I did find the first half of the book was a little slow while Lauren Oliver set up the world for us explaining the amor deliria nervosa disease and how people were cured. That wasn't the case with Pandemonium though and the story was action packed from beginning to end.

Throughout the book we are following two separate story threads:
- "Then" which is set just after Lena escaped into the Wilds, she is taken in by a group of Invalids and has to learn to live in a world that's very different to the one she grew up in. Lena has to toughen up, learn hunting and survival skills and we really get to see her grow up as she settles in and starts to make friends.
- "Now" is set several months later, Lena has joined her new friends in the resistance and has infiltrated the DFA (an organisation called Deliria-Free America who are campaigning for the cure to be administered on people who are under 18). It is her job to find out as much as she can about the DFA's plans and report back to the resistance.

I really enjoyed following each story and discovering more about life in the Wilds and the resistance movement. Pandemonium was certainly a page turner and I didn't want to put it down for a minute until I reached the end. As I'm sure anyone who has read Delirium will expect there were some shocking twists and turns as Lena learns who she can and can't trust amongst her new friends. I have to admit I wasn't too keen on the new love interest in Lena's life though. Julian did grow on me as I got to know him but I didn't really feel a connection between him and Lena and he definitely can't compare to Alex (in my books anyway!). Once again Lauren Oliver leaves us with a killer cliffhanger (although I'll confess I spent the whole book keeping my fingers crossed that something like that would happen!) and has left me desperate to get my hands on Requiem. It's going to be another long wait for the next instalment to this series but I'm sure it will be worth it.

Other reviews of this book:
Forever Reading
If you have reviewed this book on your blog please leave a link to your review in the comments & I'll add the link here.