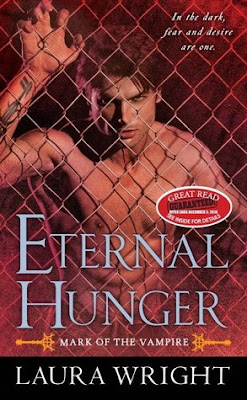 Alexander Roman wants nothing to do with the controlling rulers of his vampire breed or the family he escaped from a hundred years ago.  But as a new threat to the pureblood vampires emerges, Alexander's ties to the past are forced upon him again, and without warning, he finds himself - disoriented, terrified, and near death - at the door of a stranger.

Fear is in the Blood.
Dr Sara Donohue is dedicated to removing the traumatic memories of her patients - like those of the stranger at her front door.  But what he tells her of his past is too astonishing to believe.  Yet she has seen his flesh scarred by the sun and witnessed his inhuman strength.  And never before has she felt so connected to a man....

Love is eternal....
But as their worlds collide, Sara and Alexander are bound by something stronger, as one becomes hunter and the other prey....

Review:
Alexander and his brothers Nicholas and Lucian escaped from the world of The Order and the pureblood vampires after years of abuse and have no intention of ever being drawn back into that society again.  Alexander has gone through his change 100 years early and is finding it hard to control his blood hunger, he also has an irresistible instinct to search for his true mate.  When he discovers that his change was brought on deliberately by The Order he is told that unless he agrees to help them his brothers will be changed too.  Helping The Order is the last thing he wants to do but he wants to protect his brothers and has no other choice.

Sara became a doctor because she is desperate to heal her brother Gray who was physically and emotionally scarred by a fire when they were children.  Sara accidentally caused the fire and has felt guilty ever since, the only way to redeem herself is to heal Gray.  Discovering an injured man on her doorstep her first instinct is to turn him away but she can't leave him to suffer and ends up offering him shelter.  When she is attacked by one of her patients the mystery man saves her and she is drawn into the dark and dangerous world of the vampires.

Paranormal romance is one of my favourite genres so I'm always looking for another new series to get hooked on and I was excited to read Eternal Hunger.  Although there were some similarities to the BDB and Midnight Breed series I felt that the story was different enough to hold my interest, I liked both of the main characters and I'm curious to see more of Alexander's brothers (Lucian in particular because I loved his snarky attitude!).  However there were a couple of things that stopped me enjoying the story as much as I could have.

The first problem was the number of new words we were introduced to and the lack of a glossary to explain them all.  There is always going to be a certain amount of confusion when it comes to the first book in a series, this is something I understand and don't necessarily have a problem with but note to authors - if you are using a lot of made up words to describe your world please, please include a glossary to make it easy for those of us with a poor memory!  I lost count of the number of times I had to stop reading and flick back through previous chapters trying to find a word meaning and that just took away from my enjoyment of the story.  I'm confident that this won't be as much as an issue when I'm more familiar with the world though so it hasn't put me off reading future books.

My second main problem was the excessive use of the "C" word.  Now this may not be a big problem for some people but if there is one word I can't stand it is that one (and the majority of my friends are the same so I know it isn't an uncommon feeling amongst women in particular).  I'm quite good at ignoring the word if it crops up once or twice in a whole book but when it crops up at least twice (and sometimes as many as four times) per smexy scene I don't find it a turn on -  in fact it has quite the opposite effect and left me feeling cold about all of Alexander and Sara's encounters.  If you'd taken out that word I'd have had a very different opinion because Laura Wright knows how to write a good smut scene.  I'm aware that this won't bother everyone but it is one of those things that is likely to be a deal breaker for me and if it continues in the next book I doubt I'll continue with the series beyond that.

So, now I've got the negatives off my chest I want to finish my review by talking about the more positive aspects of the story.  I've already mentioned that I liked both of the main characters, Alexander was that kind of growly

Although I had some problems with Eternal Hunger the story was interesting enough to make me keep reading and I do want to find out more about the world Laura Wright has created.  I definitely want to spend more time with the Roman brothers so will be picking up Eternal Kiss soon.  I think the series has a lot of potential and hopefully the next book will fully live up to that.

Source: Won in a Twitter giveaway hosted by the author