It's time for another news roundup post but first I want to say happy World Book Day!  I hope you have something bookish planned to celebrate and help spread the love of reading.

You can find out more about World Book Day and the fabulous books that are available for just £1 on the World Book Day website.  You should also make sure you check out the FREE World Book Day App that works on the iPhone, iPad or iPod Touch.  It includes short stories by Malorie Backman, Neil Gaiman, Charlie Higson, Anthony Horowitz, Sophie McKenzie and Rachel Vincent so there should be something there to appeal to everyone and it also includes extracts from some fabulous 2012 releases.

While we're on the subject of World Book Day you might want to head over to your nearest Waterstones store and see if you can grab a bargain.  They are selling copies of both Department 19 by Will Hill and The Name of the Star by Maureen Johnson for just £1 each!!  These are both fantastic books (read my Department 19 review here and my The Name of the Star review here) so if you haven't already read them make sure you grab a copy.


~~~~~~~~~~~~~~~~~~
Now today is the UK release date for Pandemonium by Lauren Oliver.  It's no secret that I'm a massive fan of Delirium (read my review here) so I can't wait to read this sequel!  Unfortunately Lauren isn't coming to the UK for the launch but she has recorded a special message for her UK fans which you can watch below:

Do you want to know if you're ruled by your heart or your head?  Find out by taking the interactive quiz on the Delirium facebook page here and you could even win copies of both Delirium and Pandemonium!  I'm going to be reading Pandemonium this week so keep an eye out for my review which will be coming soon.

247tales.com is the online writing competition from Bloomsbury that challenges young writers to create stories using only 247 words or less. Now in its fourth year the competition is set to challenge even more young writers.

In 2012, the competition returns with a blog-style website, a dedicated Facebook page www.facebook.com/247tales  and nine more inspiring themes. Each month a different Bloomsbury author will pen a 247tale on a given topic. It is then over to the UK’s budding young writers aged between 10 and 16 to create their own miniature masterpiece.

One winner will be chosen each month and they will have their 247tale featured on the website as well as winning a selection of books and a framed copy of their story. Ten runners-up will get a signed copy of the latest book from that month's featured author, and their story will appear in the 247Library section of the website.

The competition launches at 2:47pm on Thursday 1st March 2012 (World Book Day) with a 247tale from bestselling author Tony Bradman on the theme of The Ship. Details on how to enter can be found at www.247tales.com. Authors taking part include Anne Cassidy, Jim Eldridge, Sarah Crossan, A.F. Harrold, Laura Powell and Sue Limb. 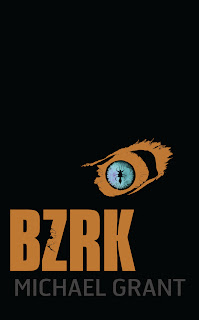 If you're a fan of Michael Grant and are free on Saturday the 17th of March then you might want to head to the Foyles store on Charing Cross Road where he will be signing copies of Bzrk, Fear and the whole Gone series from 2-4pm.  This is one of my favourite London book stores - they host some fantastic events and always have a fantastic selection of signed books and US imports so it is well worth paying them a visit and what better chance are you going to get to meet this best selling author?


~~~~~~~~~~~~~~~~~~
Now I have a cover reveal for Luminosity by Stephanie Thomas.  This is Stephanie's debut novel and will be published by Entangled Publishing on the 11th of September 2012.  I don't know about you but I think it sounds fantastic and I can't wait to get my hands on a copy! 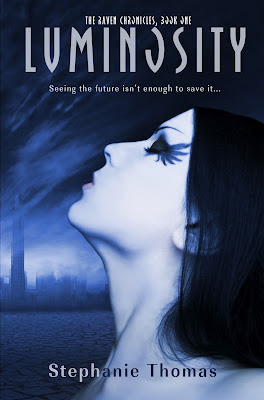 My name is Beatrice. When I was born, I was blessed with the Sight. I was immediately removed from my parents and enrolled in the Institution. At the age of twelve, I had my first true vision, earning my raven’s wings. And when I turned seventeen, one of my visions came true. Things haven’t been the same since.

The Institution depends on me to keep the City safe from our enemy, the Dreamcatchers, but I'm finding it harder to do while keeping a secret from everyone, including my best friend Gabe. It is a secret that could put us all in danger. A secret that could kill me and everyone close to me.

If you live in the UK and are 18 or over then you might want to have a go at entering the FutureScapes Short Story Competition.  Stories must be no more than 3,000 words and the deadline is the 15th of March, here are the details:

Inspired by new stories by best-selling authors Michael Marshall Smith, Marcus Sedgwick, Kate Harrison and Lesley Lokko, readers can submit their own short stories, imagining the world in 2025. It’s part of a project called FutureScapes, which aims to get everyone thinking about what the world might be like in 2025. The competition winner will be published alongside our professional authors and win a Sony Tablet.


~~~~~~~~~~~~~~~~~~
If you're a fan of Paul Hoffman's The Left Hand of God then you might want to have a look at the new interactive game Penguin UK have created on Facebook (click here to play) to celebrate the release of sequel The last Four Things.  You could even win yourself an iPad2!  Here is a bit more info about the game:

The Facebook minisite features an interactive map of Thomas Cale's world, with embedded videos that take the reader on a tour around places including Tiger Mountain, Transvaaland and The Sanctuary. There is also an embedded game where users must build 3D equipment from the book. As readers progress through each 'level' within the map, they post to their Facebook wall to encourage all of their friends to participate too! Readers must complete all levels to unlock an Augmented Reality printout of the map which will result in a 3D version of character Thomas Cale, swinging his sword and talking to the reader. Thomas then says a word which will then need to enter to be in with a chance of winning an iPad2 preloaded with a copy of the The Last Four Things.