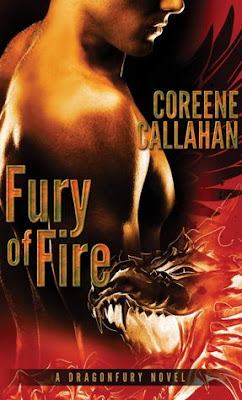 A clandestine race of half-dragon, half-humans known as dragon-shifters lives among us. Bastian, leader of the Nightfury dragon clan, is sworn to protect humankind at all costs. For him, honor and duty always come first. When the clan dictates he take a human mate to sire a son, he falters, aware that for a human to birth a dragon-shifter she must die. Myst, the woman given into his care, is the most extraordinary he’s ever met, and though he can’t bear the thought of harming her he is bound by duty.

Myst loves her life in the human world, but Bastian has captured her heart in an instant of electric connection. But Bastian and his warriors are in the middle of a deadly battle with the Razorback dragon-shifters, intent on killing every Nightfury clan member—and the humans they protect—the fate of their world and ours hangs in the balance.

An extraordinary blend of action, fantasy, and steamy romance, Fury of Fire brings to life a dangerous new world intertwined with the survival of humanity, all while exploring the meaning of honor and the nature of true love.

Review:
As soon as I spotted Fury of Fire on Amazon Vine and realised it was a paranormal romance about dragon shifters I was sold.  I have a bit of a soft spot for dragons and it looked like this would be just my kind of read.  This had the potential to be a favourite new series for me but unfortunately I had a few problems with it and it failed to live up to my expectations.  In order for me to explain what I didn't like about this book my review will contain slight spoilers but I will try to keep them to a minimum.

I was really looking forward to finding out about Dragonkind but I have to admit that I found the author's mythology was confusing at times.  Dragonkind are a race of all male dragon shifters, they must feed from the energy of human females and do this by skin to skin contact (usually during intercourse but not always).  They can only breed with human women who always give birth to Dragonkind sons and for some reason NEVER survive childbirth.  Bastian is the leader of the Nightfury dragon clan who are a group of warriors who protect humans from the rogue dragon shifters known as Razorbacks.  The Razorbacks often drain the women they feed from to the point of death and their whole goal is to wipe humans off the face of the planet.  No, these bad guys aren't particularly intelligent - I have no idea how they expect to be able to feed or breed if there are no humans left?  Even if they only kept women alive they'd be in trouble after 1 generation when no more females had been born for them to feed off of!  Another thing that really bugged me was the fact that they have all the same weaknesses as a vampire - why create a race of dragon shapeshifters and make them have trouble with UV light?  You might as well just call them vampires and give them the ability to fly.

Then we have the romance which happened far too quickly to be believable and was frankly quite creepy at times.  Dragonkind are only fertile twice a year and it is Bastian's duty to start the next generation warriors by getting someone pregnant.  He is reluctant to do it because he knows it will be a death sentence for the woman involved but he only has a week to find this poor doomed mother of his child so he can impregnate her at the next fertile period.  Myst starts off OK and I thought I was going to like her, she is a nurse and when one of her patients dies in childbirth she will do anything to protect her newborn child.  She is naturally shocked when she discovers that Dragonkind exist and she shows sense by being terrified by the discovery.  When she is kidnapped by Bastian (for her own protection) she is determined to find a way to escape and I thought she was going to make him work at earning her trust.  Sadly that isn't the case, and within hours of meeting him she finds herself irresistibly drawn to him - I really couldn't tell you why!

We are treated to a lot of inner monologue from both main characters and the story could have been so much better if it had been streamlined down and not so repetitive.  I found it hard to fall for a hero who knows that getting his girl pregnant will kill her but goes ahead and does it anyway even though no solution has been found.  I also found it hard to respect a heroine who lets her kidnapper talk her into bed within hours despite the fact that in her own words he is a monster!

Despite the numerous problems I had with the story there was something about it that kept me reading.  There were far too many similarities with J.R. Ward's Black Dagger Brotherhood and Lara Adrian's Midnight Breed series (these just happen to be 2 of my favourite series!) but if the author tidies up her mythology and makes the series her own then it does have potential.  Will I read the next book when it releases?  I probably will pick it up in the hope that the series gets stronger but I don't think it will be a book I rush out and get on the release date.  As Fury of Fire is a debut I'm hoping that Coreene Callahan Fury of Ice will be a stronger instalment.